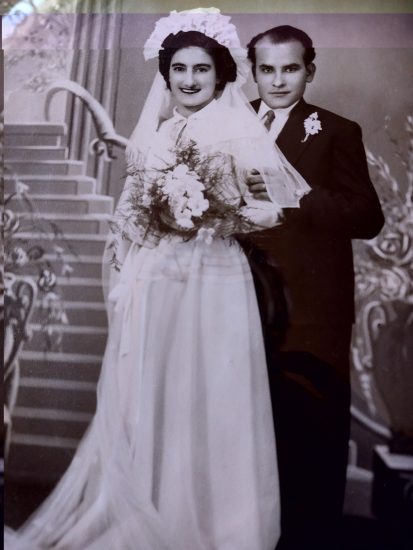 This text is the product of fiction. None of the characters described are real.

All these months, through a kaleidoscope we followed the lives of Zenovia and Zena. Perhaps at times, we identified ourselves with them, perhaps we were concerned, perhaps we were moved. It does not matter. These two women, who accompanied our daily lives, taught us some things that emerged from the universe of human knowledge, where everything that has been done and everything that will be done is kept. That is where they returned. They will always exist in the world of ideas because by reading their history and pronouncing their names we have made them exist.

I feel that I must give you some explanations about how this story began and regardless of the development it took, which many times worked automatically and voluntarily on behalf of the protagonists, it was triggered by the memories of my own life.

My mother’s name was Vassilia, and my father’s name was Kostas. My mother came from the village of Statos in Paphos and my father from the village of Marathovounos in Messaoria. They were both poor people, especially my mother, but very studious and progressive. My mother had just gone all the way to the third grade of elementary school and even intermittently because she had to take care of her younger brothers and sisters, when her parents went to farm work. My father, on the other hand, had finished primary school with honors. Because he was the best student at the school, he had been awarded the Queen Victoria Medal on behalf of the colonial government. Unfortunately, he was did not attend high school, although normally his family could have done so from a financial point of view. He had a big complaint all his life.

When my sister and I were little, my mother used to tell us about many stories from her life and from those she had heard from her own mother. I was fascinated by these stories, and I sat and listened to them with great interest. I often asking her to repeat them, thinking that I would always remember them in all the details. Unfortunately, life taught me later, that the funnel of time erases memories. That wealth of experiences we all gained from our childhood is slowly leveled off and remains a hazy memory.

During the hours, when my mother was ironing, we would sit on the floor, and she would recite to us the poems of Vasilis Michaelides: “Chiotissa” and “The 9th of July”. Even though we had heard them dozens of times, we always asked her to repeat them. Then, she, who knew them by heart, recited them loud and clear for our sake, with the ferocious style that characterized the traditional poets of the time.

My father on the other hand was a very sweet low-key man who used to work until late. But at night, when he returned home, after we had gone to bed, he would come to our room and read us stories from a book that had many myths from ancient Greece. I liked more the myth of Atalante and so I asked him to read it to us often.

Among the stories my mother used to tell us, one event that had made a great impression on me, was the story she had heard from her own mother and was about the journey of her villagers, men, and women, to Messaoria to help to the reap, in order to get paid. By the standards of the time, late 19th century and early 20th, it seemed to me a very difficult journey, as it must have been of course.

Some other stories she used to tell us frightened me and I kept them in my memory as heinous acts, but they were the result of the social conditions of the time. I am referring to forcing women who became pregnant out of wedlock to destroy the children they gave birth to either by killing them or letting them die of starvation. My childish soul was always trying to find a way out, so things would not seem so horrible, but unfortunately there was not one. Demetrios, through the pages of ” Zenovia’s secret”, came to provide the solution I was desperately looking for in my childhood.

On the other hand, Vangelis was a real person. He was my grandmother’s Lazarou brother, of my father’s side from Marathovounos. I have been hearing about him since I was very young because it seems that his family never came to terms with his untimely death. The version that he had been killed by a beloved, in her attempt to keep him close to her, I recently learned from some of my cousins. I do not know if it is true, but certainly out of ignorance that’s how many people of the time operated in their quest to get what they wished.

I wanted, by writing ” Zenovia’s secret”, to bring all these family stories together and at the same time honor my parents. Here I will confide in you a very personal story from my childhood, which in a way imposed on me the duty to do something for my family. Many years have passed since then, but it remained in my memory as an imperative that I should carry out.

I was around six. I had just gone to elementary school. Before I went to elementary school, I lived in a very sheltered environment and the only experiences I had were in the backyard of my house, playing with my sister. The mass media we had back then was a radio that basically, apart from the news, maybe a few songs and a broadcast for children, did not say much. In other words, nothing to do with today’s children who are bombarded by thousands of news and information. My soul was an unwritten book. The school has been a momentous change for me. I began to understand that the world was much bigger than our backyard and there were so many things to learn and think about.

So, one day, this existential question arose in me:

-Why was I born, why was I born in this family and in this place? What did I come to do on this earth?

I thought that the only one who would know how to answer these questions would be God. I knew of course that God dwells in heaven, and heaven is high, above our heads.

In the yard of our school, we had many olive trees. At one of the breaks, I went and stood under an olive tree. I looked up at the sky and submitted my question to God, just as I mention it above.

I waited patiently, and God answered in my head by telling me the following:

-This is not the first time you were born. You have been reborn. You came to this family to help them (or make them happy).

Perhaps there were more words and details that I do not remember. But the main meaning was this. Happy that I got a clear answer from God, I went home and told my mother everything. She was rather negative.

-You shouldn’t say things like that, she told me. Our religion does not accept them.

But I knew for sure that this was the answer God had given to my questions I did not repeat it to anyone else then, but I did not forget it either. Then, when I grew up, I learned that there is such a theory about repeating the birth of souls, in different bodies, in other religions. But back then I was not aware of such theories. This answer came identical and authentic to my childish, pure mind.

But I have always been troubled by that: “You came to this family to help them (or make them happy).” I did not think I had ever done anything special to help my parents. On the contrary, with the independence of my character, I felt that many times I made it difficult for them.

The years passed, and although I cannot say that I often thought about this childhood experience of mine, somewhere in the background there was that I did not offer something particularly positive to my parents, as God had told me.

So, in writing these stories today, I feel that I honor their memory and bring their spirits to life, where they are, in any place they might be.

So, I dedicate ” Zenovia’s secret”, to my parents Kostas and Vassilia, who in their anonymity and obscurity in their passage from this life, were two special people. Through this journey and this deepening in the world of ancestors, I understood that the hereditary line of life is not unrelated to who we are and in this context I want to honor all those who already existed.

The ancient Egyptians, who gave a very important culture, one of the most important of humanity on earth, believed that for a dead person to exist after death his name should be pronounced. I believe that our religion advocates the same, mentioning the name of the deceased on the crosses on the graves and repeating it at the memorial services. So, I repeat the names of my ancestors in my writings to give substance to their memory and existence on this earth and perhaps beyond.

In conclusion, I would like to thank you for following me on this journey and ask you to take some time to write down your impressions and comments, as they will spontaneously come out of you. These words will certainly be the most important help for me for the future.

The following posts are related to the text above

A loaf of bread

A house made of plinths