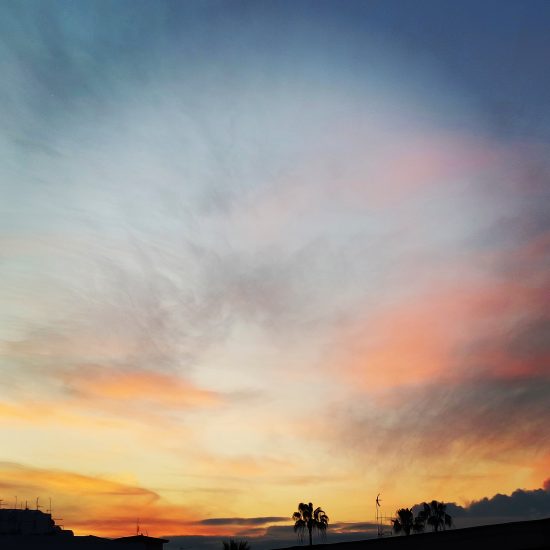 This story is based on real events as they survived through the generations that followed. The plot of the story is fictional.

Vangelis, on his white horse, was riding in the plain of Messaoria. His blonde hair fell on his forehead and his blue eyes looked at the sun sinking on the horizon, this magical hour of the evening. The cool air caressed his face and he felt like a free bird. The crops, ready for harvesting, danced rhythmically in the breath of the wind and the smell of wildflowers, which grew on the edges of the fields, scented the atmosphere. The world was perfect.

Vangelis was extraordinarily handsome. He did not look at all, like the Cypriot men, who were brown-haired of medium stature. He was a tall, blond-haired young man, with blue eyes. He had the colors and appearance of his father who came from afar and no one knew his origin. All this might not have played any role, if the proportions and harmony of its characteristics were not so perfect.

He was aware of his beauty. He could see it in the mirror of his house, he saw it in the eyes of the girls of his village and not only. They looked at him with lust and often with ecstasy. At first this was a lot of fun, boosted his self-confidence and gave him an air of complacency and arrogance. Slowly, however, he realized that it could be dangerous.

His eyes darkened as he remembered Melina, the sister of his friend Elias. Vangelis went to their house often and at first, he was flattered, in the way Eleni was looking at him. Full of lust and promises. He also responded with ambiguous glances, giving her hope, but deep down he did not really like her. There were other girls in the village whom he liked better. In his mind came that young girl who lived in the upper mahala (neighborhood). She was sweet and shy. Every time she saw him, she blushed and ran to hide. As her cheeks rose from embarrassment, his heart beat hard. He could love her!

Lately, Melina had become persistent, she claimed him with stubbornness and as long as he did not respond to her gaze, she was filled with anger and jealousy. He could feel her anger when he visited their house, and he was preferring not to go there often. But Elias was his best friend. It was hard to find excuses to avoid the visit when he was invited.

These thoughts spoiled his mood. He spied his horse and perished in the evening.

The figure of Vangelis had become an obsession to Melina. While sleeping while waken up, only one thing she could think of: Vangelis and her love for him. She knew him since she was a child. He was originally coming to their house to play with her brother. Growing up though and entering adolescence, she stopped seeing him as her brother’s friend. He was the male that every girl craved, and had to make him hers, her husband. In a society, in the village, in the early twentieth century, where courtship was considered shameless, Melina was indirectly trying to show her feelings to Vangelis. Besides, there was her father. A man of strict morals, who would kill her if she were diverted. So, she would throw hidden glances at Vangelis and sometimes, as she was passing by, she would touch him, supposedly by accident, trying to provoke an erotic desire to him.

She was not particularly beautiful. And she knew that. She was short, brown-haired, and overweight. But her eyes were big and pitch black. With this gaze she tried to seduce him. The idea that someone else could take him, made her mad. He did not seem to end up with any of the many girls that were chasing him. He was the prince of the fairy tale, on a white horse, for almost every girl of the village and he enjoyed it. Lately, however, she had heard that he was attracted by a young girl in the upper mahala (neighbourhood), and this angered her.

-No one will take him, she thought. He is mine!

One day she decided to talk to her friend, Katerina, and ask her opinion, how to make him love her. Could she use witchcraft? Katerina thought for a while before answering. She was an unusually mature girl for her age, and she could see beyond the dark feelings of her friend.

-I think, you can’t force anyone to love you. And if you do it with magic, as you say, what will you gain? One day the spell will be solved and then he will not want you anymore. Have you imagined how hard this will be for you?

Melina got angry with her friend. She accused her of wanting Vangelis for herself and that is why she was talking like that. And she asked her to leave.

The dark forces that govern the universe found fertile ground in Melina’s soul. And they gave her the tools to conduct her illegitimate plans. One day Eleni learned that a witch had come to their village. She was staying in a hut at the edge of the village, and if she was paid well, she could fulfill all human desires.

So, at sunset, Melina put a kouroukla (black shawl) on her head and set off for the witch’s hut. She had taken with her two of her mother’s konstantinata (gold coins) to pay the witch.

The witch heard Melina’s wish, but her interest grew only when she saw the two gold coins. She smiled evilly and began to stir some bottles, muttering unintelligible words.

Melina was horrified by the whole scene, but her desire was beyond any reasonable warning.

-Take this bottle and put three drops of this liquid in his wine. When he drinks it he will love you, and only you. Now give me the konstantinata (golden coins).

And she grabbed the coins from the hands of the frightened Melina.

Eleni ran away. Her feelings were mixed. From the one hand she was happy that she would make Vangelis her own, forever, on the other hand she was terrified of the way she would achieve this. But she was determined.

Vangelis tried to refuse when Elias asked him to go to their house in the evening. But it was hard to find an excuse to avoid it. He succeeded for once or twice, but in the end he had to accept. That night Melina wore her best, prepared some sweets, and filled two glasses with wine. She made sure that in the glass she served in front of Vangelis, she poured three drops of the liquid that the witch gave her. But before giving it to Vangelis, for safety, she put three more drops. She wanted his longing for her to be eternal and strong.

Before placing the glass in front of Vangelis, she looked him in the eyes with a fiery gaze. He tried to avoid her and looked down. This infuriated Melina, but at the same time she felt a triumph because she knew that soon Vangelis would be hers, forever.

As soon as Vangelis drank the wine, he got up to leave. The wine seemed bitter and tasteless to him, but he said nothing.

-I will never come back here, he thought. And let Elias be displeased.

In the evening Vangelis became seriously ill and the next day he died. Lamentation in the village. The most handsome young man was dead. Rumors were giving and taking. The women in the houses, the men in the coffee shops, rumored various things, but no one knew anything for sure or could prove something. But everyone’s eyes were turned to Melina…

Elias, when he realized what had happened, nearly drowned her. She was forced to tell him the whole story and angry as he was, he ran to find the witch. He was determined to kill her. But she had disappeared. No one ever saw her, again.

Vangelis’ soul flew over the procession that accompanied his coffin to the cemetery. He saw the pain of his own, he heard the laments of his mother, father, brothers and sisters. The girls who loved him, as one group, trying to find solace with each other, followed further back. Only Melina stood alone, dejected like a ghost. Everything had drained from within. Her life was over.

Further away from everyone was the young girl from the above the mahala (neighbourhood). She was holding a few flowers in her hands and her eyes were full of tears. Now that he saw her, so weak and unprotected, he was sure that he had loved her. If he could, he would take her in his arms and comfort her. But it was too late…

He turned to the angel who accompanied him and asked:

-Why? Why did this happen? I could have lived many more years.

-Every person born on earth receives gifts from God, the angel replied. You have been given more gifts than humans deserve. You were divinely handsome, and you spread lust and pain. You could not live for long. You were spoiling the balance of the world. Instead of an unhappy life, you were given a premature death.

-Will my life ever be vindicated? Will I ever be remembered by people, me, who left no descendants?

-Don’t worry the angel told him. As strange as it may seem to you, everyone is vindicated in this world. in one way or  the other. The vindication may not be immediate, by human standards, but the day will come. And your memory will live in eternity.

Vangelis looked down to see for the last time the girl from the upper mahala. He saw her depositing the flowers in his grave and he sent a kiss to her heart.

-Come, the angel exhorted him; Eternity is waiting for you.