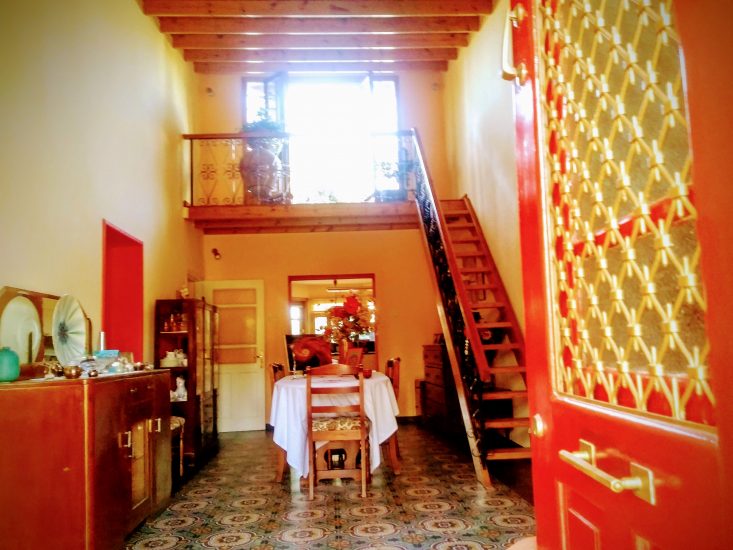 My childhood – before the age of six – is surrounded by a foggy environment that from within arise bright snapshots, like scenes from a period film.

At that time, people’s lives were quite different from today. Technology and technological achievements were luxuries for a few and for the rest of us were opening windows in a magical world, that we really wanted to enter.

The first technological achievement of the time, we had at home, was a radio. It was a rectangular box, in brown colour, that kept braking. I remember my father opening it from behind, at night when he was coming home from work, to fix it. I was curious to see the little people hiding inside it and talking. To my surprise, there was no one inside, except some wires. No matter how much I asked, and no matter how much they tried to explain to me, I could not figure out where the little people were going, so it all seemed like magic.

In this environment, I first heard the word television. It was before 1960. The neighbouring house was home to a family, whose father was a factory owner. They were the first people in the neighbourhood to buy a television. I remember seeing the technicians, who climbed onto the roof of the house to place the antenna. A rectangular metal frame with pipes and wires. I was watching them, and it was impossible to understand what they were doing. I asked my mother, and she told me that our neighbours had bought a television.

– And what is a TELEVISION, I asked
– It’s like a radio, but you don’t just listen, you can see what people do at the Cyprus Radio Corporation every night, she told me.

But it was not long after, that the family that rented my aunt’s house, which was a double house with ours, bought a television. On summer evenings, Mrs. Ellie, the lady who had the television, used to take it out and turned it to the side of the yard. Well, you cannot imagine, what was happening next! Not only us, but all the children in the neighbourhood enjoyed the magic that this box provided us!

My grandfather Stylis, who lived with us, made stools with old and useless boards that were in the yard, and me and my sister used to put them in order, as in the cinema and waited for the children of the neighbourhood to come. The seats filled quickly and many times in the darkness, we could hear some other children, moving in the shadows and watching television from afar, standing. Oh, we were all incredibly happy that Mrs. Ellie had a television and let us watch!

The television program was limited. It started around 6 or 7 p.m. and ended at 10 or 11 p.m. I do not remember if it was broadcasting every night. Twice a week the program was in Turkish (Tuesday and Friday I think). We were interested in children’s programs, and as I recall, it was an animated series with Captain Pirot and Tom the sailor. Captain Pirot was a clumsy pirate captain who screwed up, and Tom the little sailor was always saving him. Of course, the captain was claiming that he was doing everything himself. The episode always ended with the phrase: “and Tom the sailor smiled and said nothing”. In this television fever, we had no problem watching the broadcasts in Turkish. It was again the same animated series, except the captain and the sailor spoke Turkish. Since we already knew the story, we barely cared about the language they spoke.

But then Mrs. Ellie left, and we were again without a television! Destruction! We were now addicted to the magic box and the deprivation was painful!

Then Mrs. Irene came and rented a small house next to our house, on the other side of the one where the family of the factory owner lived. She also had a son named Michael, and my sister and I used to play with him. Mrs. Irene also let us go with my sister to watch television. But my mother did not like that very much, because Mrs. Irene was working, she was coming in at night tired, and it was not right to go and bother her. But we could not resist the temptation. So as soon as it got dark, we would start with my sister for Mrs. Irene’s house. As it was dark, shadows were created in the clouds from the moonlight, and my sister was afraid. She bent her head, so she would not see, and I used to hug her, so embarrassed with each other, we ran for Mrs. Irene’s house.

That was over for a time, too. Mrs. Irene’ was gone, and we remained again without a television. Deprivation syndrome has paid off for us again. But my mother was clear: We do not have money to buy a television!

The years slowly passed and came 1963. On 21 December 1963, the Turkish mutiny against the Government of the Republic of Cyprus took place and the inter-communal disturbances began. My uncle and aunt, along with their little daughter, were staying in the old town of Nicosia, near where today is the Green Line. Because of the danger they faced, living so close to the Turkish quarter, my uncle brought them to stay with us.

Then there was no Cypriot army. The Turkish Cypriots were organized and armed by Turkey. There were battles between the Turkish Cypriots and groups of Greek Cypriots, who were like rebel groups. My uncle belonged to one of those groups. After leaving his family at our house, he went to fight around Ormorita and Trachona areas, in the northeast of Nicosia. Many Turkish Cypriot residents used to live there. I do not know exactly what happened and how he managed to get a television out of a house, as they were operating like a naughty army. So, he brought the television to our house. As soon as my mother saw it, and realized how she got it, she became furious. Take it right back, she told him. I do not want that in my house even for a minute!

And so, the television went away again! My sister and I were inconsolable. Unable to understand the moral part of the whole affair, we just knew that the only television that came to our house left immediately, and we were left with withdrawal syndrome again.

Not many days had passed and our father, who was a very loving and sensitive man, unable to see us sad, went and got a television in instalments. The first television of the Sierra brand came to our house in early 1964 and for years was a reference point in our small world.

Today I cannot imagine any child being surprised by the television, mobile phone, computer, or any other device. It is a given that they exist. One does not wonder what they are. And yet, this question at the time had its value: it energized interest and learning.

Those times, though difficult, seem romantic. And in a way they were romantic and tender because people found satisfaction in each other’s company and not through devices and technology.

I do not want to beautify the past and discredit the present. On the contrary! I do enjoy the technological means we have today and try to use them productively and for communication. But I write these stories to testify the everyday life and to travel the minds of all of us to a past that has gone, but it was for its time, a dynamic and interesting present.