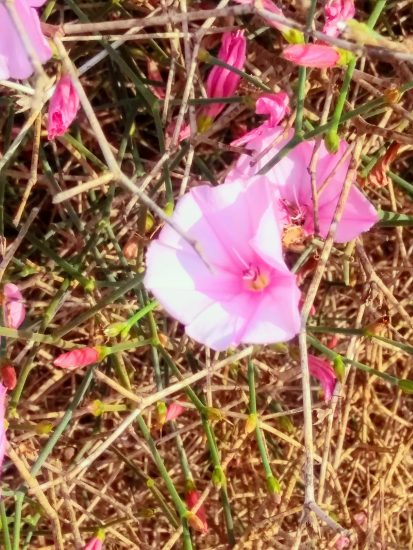 Our neighbourhood was the most remote of the school. It was at least a kilometre away. Then, in the ’60s, we used to go to school six days a week, twice a day, in the morning and in the afternoon. If I remember correctly, the hours were: 7.30am. – 1.00pm. 3.00 – 5.00pm. Saturdays and maybe Wednesdays, we had just morning school.

So, we would start, every morning, to go to school. Between our neighbourhood and the rest of the suburb, there was a big field that was cultivated with grain. In the middle of the field there was a path that we followed, as a shortcut. We made this trip four times a day.

In winter, our shoes were filled with mud, and we used to laugh, saying that we were wearing heels. As we got home, wet most of the time, our mother waited for us with a bucket of hot water, to get our feet warm, so we would not get sick.

We were given strict instructions never to get into any car that would stop to take us to school. One winter morning it rained heavily, and as we were running to get to school, a man stopped and suggested he take us in his car. We said firmly: no, our parents will not let us. The man got angry: either you come in the car, or I’ll beat you up, he told us. We were started by his shouts and got in the car. Thus, the man took us to school, and in a way, saved us from the rain.

In the spring, the route had other pleasures. In the field the crops grew and almost were higher than us, while its outskirts were filled with wildflowers. Among the wildflowers lived all kinds of bugs. The most beautiful were the red ladybugs. We used to sing the following rhythmic (in Greek) naïve song to them:

But we were also fond of the “millers”. These were little bugs that their nests looked like funnels in the ground. Those nests were beautiful and symmetrical, but we used to take a small stick and stir them up, while singing the following song:

“Get out, come out miller and your daughter is here to grind”.

The poor miller would come out scared and we would take him in our hands for a while and then leave him. Why did we do this, I do not know, and I do not remember. However, much later I learned that this masterful nest was constructed in such a way that the ants would fall in and be trapped there, for the miller to eat.

At that time there were herds of stray dogs and as we walked down the path, they used to jump through the crops in front of us. That scared us a lot, so we were always walking in groups. One afternoon, I do not know why I left the school late, and when I got to the field, I was on my own. I was afraid to get on the path, and I stayed outside and waited. What did I expect? I do not know. I stayed long enough until a lady noticed me. She came up to me and asked me why I was not going home. I’m afraid of the dogs, I told her. Come on, I’ll take you, she told me, and took me by the hand. At the same time, my mother appeared to emerge from the path. She was worried I was late, and she got out to find me.

In the summer, the route became even more interesting. We were even more relaxed because the weather was nice, and the school would be closing in a while. The suburb we were staying in, was one of the beautiful ones of Nicosia, with nice neighbourhoods and nice houses. Many were new and rich, but there were many old ones, where their inhabitants were engaged in traditional arts and professions that today do not exist.

So, on our way out of school, we would change our route and go through a neighbourhood where a man was making a home made soft drink (it was called gazoze). This was a kind of traditional soft drink that was red or dark lilac. Back then there was already Coca-Cola, Pepsi Cola,7up, KEAN, but we preferred the gazoze. So, whenever we had a few pennies – and that was not every day – we used to pass by this house. The man was a little fussy and muttered when we went, but because he wanted our pennies, he would take the bucket down to the well, where he had the gazozes to freeze, and sell them to us. I do not know how I would appreciate them today, but then it was for me the most beautiful soft drink, as it was frozen from the well, in the hot midday sun!

When schools closed, the field still played an important role in our lives. In the summer, when the crops were sowed and the haystacks were left in stacks, until they were picked up, we used to play with them, sometimes climbing up, sometimes building “houses” and letting our imagination create magical worlds.

The field, in the months when it had no crops, was also used as a camp ground for a family of beggars. Father had lost one leg and mother was deaf. While they were camping there, their children would come to our school. One of them was my classmate. Unfortunately, however, because the child was constantly moving and there was no support from his family, he was far behind in lessons compared to the rest of us. But I remember him because he took the same route with us from school.

It has been many years since. The field no longer exists, there have been built rich houses and a large church. There are no more herds of wild dogs, only pets accompanied by their owners with the leash, on the road. There are no beggars camping in the fields, neither there are gazozes in the well to freeze.

Thus, I say goodbye, to a time that has passed and left its seal and its presence in the endless chain of life, which regulates the evolution of the human race.