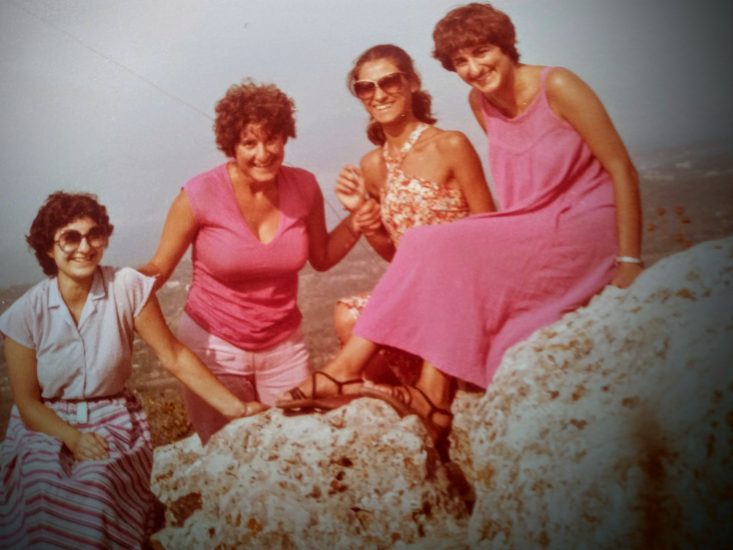 The Return from Corfu

Dedicated to Stavroula, who passed away at the age of 32, a beautiful spring day of the April.

That year, in 1981, we had two engagements in the summer. Both, in September. Two friends would get engaged, a week apart. Back then the foreign customs, Bachelor night and Hen’s night were not so prevalent, and we did not know about them. Besides, our temperament was pushing in other directions. We loved travel, the beauty of nature and getting to know other worlds. The furious nights in nightclubs, with sly innuendo, would never be among our priorities.

We had decided to make a trip to Greece in August, as a farewell meeting of our girls company. It was just the three of us and one cousin who came from Australia. I should note that our budget was limited and so our program basically included hospitality in student’s homes, that were away to Cyprus for their summer holidays, and staying in cheap hotels when there was no such facility.

I will only describe a few moments that I think are of particular interest and, as I said before, are not included in the travel guides and documentaries.

In Athens, we were staying in a miserable, dirty flat of a student who was in Cyprus and to be able to have a bath we had to clean the bathtub and give it moments it never saw since it was installed in the flat! The tub must have been incredibly happy, we were not!

In any case, among the excursions we made was also the one by boat to the islands of Poros, Hydra, Aegina. I remember when we got on the boat and sat on deck watching the seagulls flying over our heads, I felt like I was somewhere in heaven. All the hassle we went through every day did not matter. We were meeting, at that moment, our dreams, on board. When we visited Hydra and saw for the first time in our lives the beauty of the Greek islands with its narrow uphill streets and traditional houses, our joy was indescribable! We were going up and down like wild goats while the tourists were buying souvenirs from the shops. We even walked into a coffee shop at the end of the top of a narrow street and met old sailors. Magic!

Another destination of that trip was Corfu. To get to Corfu, and always adapting to our limited budget, we had to take the bus. An endless journey of many hours (eight if I am not mistaken) to get to Ioannina, where we would stay in the evening and the next day, we would take the ferry boat to Corfu.

At the cheap hotel we were staying, we had another funny incident. I had had my bath, put on my nightgown, went out on the balcony, and looked at the narrow quiet alley in front of the hotel. At the same time, my cousin, from Australia, took turns in the bathroom. We both hear at the same time a bang on the door and a loud male voice saying, “Open, my love and let me in to enjoy your body!”. Until we realized that the call was not addressed to us, but to the lady in the next room, who was also having her bath, we almost fainted. Her warm partner wanted to play, and she was pretending to reject him. The walls were so thin that one could think that we were all in the same room.

In Corfu, we were staying in the flat of a relative, who worked at the Corfu Hilton. He gave us his little house while he was staying at the hotel. We were having a great time. Because, as we said, we had a low budget and wanted to visit all the places, we were organized as follows: each of us, put an amount in a joint fund every few days. One of us was the cashier, she kept all the money, and she was the only one paying. Another was the accountant; she kept a report, writing down all the incomes and expenses. Even the bus tickets were paid only by the cashier. Complete organization with amazing results. We had visited every corner of Corfu and enjoyed all its beauties.

Before I describe the adventurous journey back, I will refer to another spicy incident. We were towards the end of August and Corfu was starting to have sudden showers. One day as we walked through the city, it started raining. To protect ourselves, we entered the first café we found. If I am not mistaken, it was called: Dirty Dick’s or something like that. We were the only customers. The tables were those American type ones, which are in line, leaning to the wall, with two bench-type seats, one behind the other. So, we were sitting two in one seat, two in the opposite, on one side was the wall and on the other the aisle.

We were approached by the owners or their employees; I do not know exactly who the cheeky youngsters were, who immediately pushed the ones who were sitting on the side of the aisle and sat next to us. So, they trapped us in the seat, and we could not leave. They started a peculiar conversation, not welcomed from us, and although we tried to explain to them that we were not at all willing to go on adventures, they insisted with insolence. I do not know how we agreed with each other, all I know is that all of us jumped over the seats, at the same time, in the next seats and started running.

Like I said, we were organized girls! We did not leave anything to chance. We studied the return trip – within a week the first engagement would take place – and decided the following:

With such an organized program, surely, nothing could go wrong!

However, the reversals began to take place in a different order than described above.

We washed our swimsuits and hung them out early, packed our bags and lay down to sleep while the radio was playing songs. We had even left it loud enough to hear it at 6:00 in the morning when it was going to start. Furthermore, we could not sleep, of course, but it would not matter at 12:00 midnight it would stop. It was 1:00 p.m. and the radio was still playing, playing at 2, 3 and at 6 in the morning the broadcaster announced: the time is 6 in the morning. Our program has ended. And the radio was finally quieted! We got out of bed, completely sleepless, and started picking up our swimsuits, which not only were not dry, but they were also wetter than when we hug them out because of the humidity. Anyway, we put them in plastic bags and kept them in the suitcases.

We left the house and started ascending the steep climb to the nearest hotel. It should be noted that the suitcases had no wheels. We were carrying them! When we arrived at the hotel, the receptionist was not willing to call a taxi for us, with various pretences. We left there and continued uphill to the next hotel. I do not remember how, but at some point, we found a cab, but we were already late. We are out of the time of the strict program we had set!

When we sat in the taxi relieved, we decided to check the tickets for the bus. And then there was the big surprise: Our tickets were due next week!! We did not know how, but the mistake was huge. In a week, there was going to be the first engagement!

When we arrived at the bus station, frightened and in agony, our cashier, who felt responsible for the mistake, approached the strict employee to explain to him what had happened. He shouted at her; he was adamant: There are no seats. The bus is full. You cannot leave today.

Nor did the return tickets from Athens on the plane, we showed him, soften him up. We asked if we could fly from Corfu to Athens, but there were no seats there either. Everything was full.

We sat in a corner, scared. Someone even dropped the idea to start crying, so they would feel sorry for us. But that was not our type! How do we do it? We were courageous girls!

At the last minute, the strict employee gave us some notes and told us to show them to the bus driver, and they will give us stools to sit in the hallway. Anything, we just wanted to leave.

We got on the ferry boat to get to Igoumenitsa to take the bus. Our stomach was tied knotted by insomnia and agony. But as the boat was moving away, and we saw Corfu in the golden, dull morning light disappearing on the horizon, I remember thinking: Will I God be able to see all the beauties of the world before I die?

There were other minor adventures before we got on the bus, but it did not matter. At the end we had normal, scattered seats, not stools.

We arrived in Cyprus on time and the engagements took place as planned.

In my mind remains a memory of the words Stavroula told me about this trip: Thank you, it was the most beautiful journey of my life!

You see, I was the organizing mind of this paradoxical adventure!