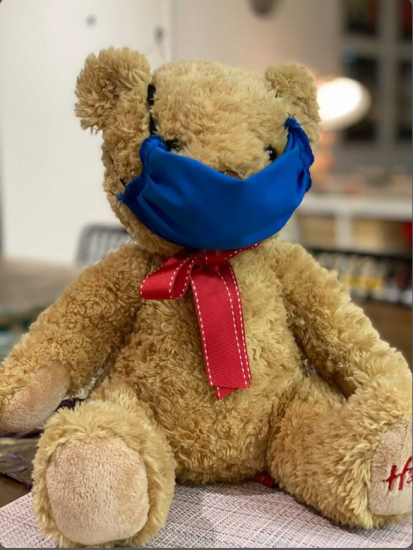 I am a multi-use mask. I was born in a factory. I was packed and arrived at a pharmacy. I was in a drawer and I could not see the light or hear the news from the world.

Not long ago, there was a lot of fuss at the pharmacy. I was grabbed from the drawer, and as soon as I faced the light, I saw two ladies arguing over who was going to take me. I felt so important! As the fight ended, I found myself in the bag of one of them, along with an antiseptic. The antiseptic knew all the news. He was on the pharmacy’s shelf, hearing about everything.

He told me that lately came into the world a king with a crown, who is the son of some great king* – (see below). This king frightened people because he is invisible, enters inside them through their mouths, builds his kingdom in their bodies, makes them sick and sometimes kills them. People are afraid of him, and that is why they buy me, to stop him from getting inside their mouths.

That is when social life started for me. The lady wore me when she used to go to the supermarket (she was not going anywhere else! As the antiseptic told me, there is a curfew, because people are afraid of the king). That is where I saw masks you cannot imagine! All the models showed off on people’s faces. They did their shopping scared, and they hurriedly scurried away. The king seems to reside in the supermarkets.

One night, the antiseptic said to me:

—Things are no good. It seems that the king is beginning to lose his power and people are starting to relax. Didn’t you see that your lady forgets to wear you, sometimes?

I was upset in a way. I had become accustomed to the social life. I loved going out, seeing other masks, having experiences, anyway. I discussed it a little with the gloves, which I had met in the lady’s handbag. These were disposable, and they were thrown away after every use. Their lives were short anyway. They did not care how long the pandemic would last.

My lady’s is going out more lately, but she remembers to wear me, less and less. I am afraid my social life is over. But the antiseptic – sitting at the TV table at night – told me that the king could come back in the autumn. People are relaxed, and they are not paying attention any more.

This has raised my hopes! I declare deeply royal and hope to live the kingdom of the son again! Long live the king with the crown!

*a pun of the Greek language

Coronavirus in Greek is κορονοϊός. It consists of two words:

Editing in English by Andreas Markides