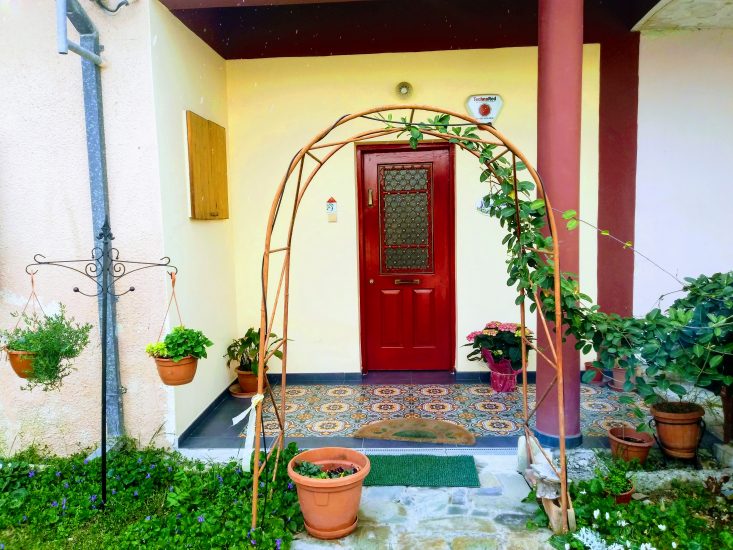 Dedicated to my mother Vassilia and my aunt Eleni

I would be about 13 -14 old. It was summer, one of those hot summers of Cyprus. People’s lives at the time were different and daily activities had a significant weight. The program of our house determined that every Thursday would be dedicated to washing the soiled clothes, of the whole week. What did that mean? It was a serious process that I will try to describe to you, as, at least, I remember it.

First, I should note that we did not have a washing machine. Everything was done manually, in the traditional way, that the housewives of Cyprus followed for centuries. Our yard was covered with vines hanging on pergolas, which ensured some shade from the hot rays of the sun. My mother and aunt – who lived with us at the time – started very early in the morning, lighting a fire in the courtyard, and placing up a large cauldron (harji in the Cypriot dialect), in which they used to put water and grated flakes of green soap, or even the soap for the clothes of the time, the so-called SIVA, to boil together. They then placed all the white clothes (e.g., sheets) inside and mixed them with a wooden stick until they were cleaned. I do not have to tell you how much the clothes were cleaned after this procedure. They were shinning!

For the coloured clothes they followed another method: they filled the children’s portable baths, which were use for washing babies, with lukewarm water and put in, only the clothes that had similar colours, initially the lighter ones, at the end the dark ones, and washed them by hand. In places that were persistent stains, they rubbed them with green soap, until they cleaned. They used the same water, not to waste water, but the clothes became as new without wearing out.

The high-tech act of the time was about the latest rinsing of the white clothes. The secret to make them shine, was the indigo. What is that? I do not know exactly, but it was a lilac-coloured material that was dissolved in the water of the last rinse, before putting the white clothes in. The technic was not to put in too much, but just the right amount, otherwise the clothes would become blue. My mother, who was a perfect housewife, had no chance to be wrong! So, when the linen were hanged out under the vines, they were waving white with an imperceptible blue glow. Cleanliness in all its glory!

In this ritual – because it was a ritual – our role, my younger’s sister, and mine, was secondary to non-existent. We helped a little, without getting tired at all. At this age I describe, I was entitled of preparing the lunch. It was a great honour for me. So, in the summers, when I did not go to school, I cooked the only food I knew how to make: aubergines and zucchini fried with potatoes and salad. I felt proud when my mother and aunt, exhausted by fatigue, came in for lunch and told me that the food was delicious! In the afternoon, the ritual continued. After the clothes had been dried, they had to be collected and folded. In that, we were all comtributing. Each sheet was folded by two of us. One was taking one side along and the other, the other. As we folded them, we pulled them diagonally so that their edges would not “hang” and stay in an absolute rectangular shape. Nothing to do with today’s linen folding.

Another interesting folding was that of the socks. It was a job that neither me nor my sister liked. We took all the socks in one bowl and initially had to divide them into pairs (there may have been more than 25 pairs). Then we folded each sock separately in a special way, so that, as my mother used to say, the one who would wear it, would put it on the toe of one’s foot and pull it up and apply it perfectly. Then we would fold the socks back into pairs and put them away.

My mother and aunt took care of ironing the clothes that were washed. The shirts and a lot of dresses were starched, so they would not have any dice. Late at night, it was all over, and the house was filled with clean, ironed, and tied up clothes, until next Thursday when everything would start again. One Thursday though, my mother got ill. When that was happening, my mother could not get out of bed. She used to suffer at the same time with vertigo and a severe migraine. She had to stay in bed for a few days, in the dark and in complete silence.

I do not remember much detail about the whole process. All I remember was that when at noon we finished washing and went in to have lunch, I literally thought I was going to die of fatigue. I am not exaggerating; I could not imagine until then that a person can get so tired! I could not feel my body and I wanted to bend and fall. Luckily, auntie took care of the ironing and I did not have to keep working in the afternoon. This experience had troubled me a lot. I could not imagine how my mother lived through this fatigue every week. So, I started thinking about how I could help. I knew that in modern houses there were washing machines, which made washing clothes a breeze. But we did not have a washing machine. Mainly because we could not afford it, but also because my mother thought the washing machine did not clean clothes, like handwashing. She was not wrong about that. I have never seen linen as clean as those that were hanging under the vines in the yard of my house in those years. I have never smelled cleaner clothes than those, even though today we use so aromatic clothe softeners.

But the thought of the washing machine was wedged in my mind, and I was obsessed. I was asking my classmates how much a washing machine costs, and I concluded that for a hundred pounds I could buy a washing machine for my mother, so she would not get so tired. But from where could I get the hundred pounds? The only allowance I got was five shillings a week (every pound had twenty shillings) and with that I would have to pay for the bus and have half a shilling left, with which I bought once a week a delicacy from the school canteen. At first, I thought I would stop eating the delicacy and keep half the shilling. But it would take 4000 weeks to raise the £100. It was both impossible and unreal! So, I came up with the solution that all the naïve and dreamers of this world come up with: to buy a lottery ticket!

I did not tell anyone anything. So, I stopped eating the delicacy and every week I kept half the shilling until I collected the amount that a lottery ticket cost (three or five shillings, I do not remember exactly). Then I explained to God my intentions: I was going to buy the lottery ticket; I did not want to win the first lottery ticket. I only wanted to earn a hundred pounds to buy my mother a washing machine, in order not to get tired. Simple and clear request. God would surely agree!

As soon as I collected the money, I went to a lottery seller standing at the bus stop and bought the first lottery ticket of my life. With trembling hands, I chose it and waited for the draw, on Saturday. I had a certainty that I would win.

Saturday came and I checked my lottery ticket twice. Once when the results were announced from the radio and once from the newspaper. I did not win, if this is possible! I did not win anything. Not even a pound! My dream of buying the washing machine exploded like a soap bubble in the air. My frustration was palpable. I was angry. I am not going to buy a lottery ticket again in my life, I have decided. And I almost did, to be honest. I rarely trust my dreams and aspirations to chance any more. And I certainly do not trust them in the lottery!

My mother got a washing machine much later, but she still did not trust it. A lot of clothes were hand washed for better results. Until the end of her life, she was sceptical of this machine that was built to help women, but it had no love for either the clothes or the family it was working for.

For me, this whole thing was a lesson. Of course, much later I realized it. Beyond the obvious messages that life is not fair and that lotteries are not a solution to our problems, there are others, much more important. The functioning of the universe and the laws that govern it have nothing to do with the individual needs and desires of each of us, however necessary and fair they may seem to our eyes. The functioning of the universe has other rhythms and other specifications that do not concern our own atomic microcosms. We may never understand, as we look with our own eyes, the greatness of the universe. At some point we will have to overcome ourselves and stand, somewhere in infinity, to see the world from the perspective of totality.

For now, I keep the memory of the white linen shining in the hot summer sun, far away, in the fog of my childhood, and the tender heart of a girl who just wanted to do good.