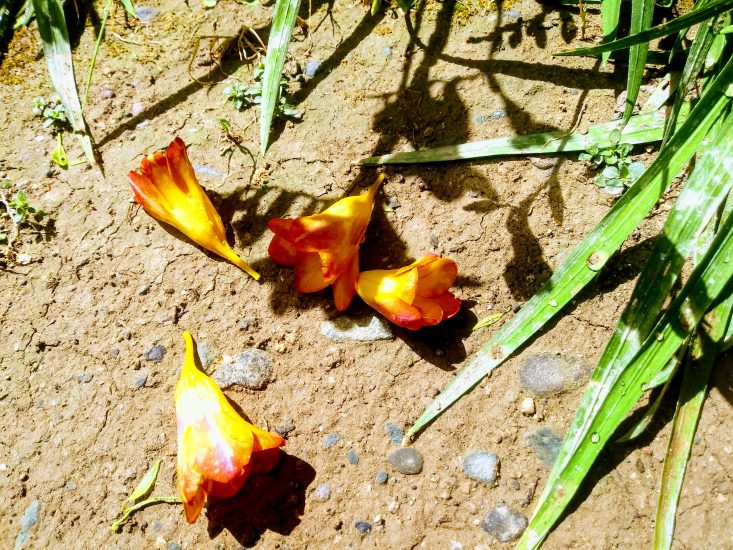 The petals plucked.
and painted the dry soil
with golden highlights.

The rain had not watered the earth for a long time.
The power to connect the grains to each other was no longer there.
They scattered, dust in the wind,
infected people’s breath,
blurred their eyes,
make them shone red on their pale faces.

Everything was hot, fiery,
the hope fled,
and the dreams were burned.

The pigeon remembered the deluge,
with the waters foaming uncontrollably spreading death
and annihilation.
It remembered the ark that saved the creatures of the earth.
Life had to go on.
Darkness that gave dawn to light!

Today there was no water.
The life-giving power, which then, became death,
did not exist.

Today the hot sun was scurrying the existence,
dissolving the soil to the five winds.
Thirst burned the lips.
Brilliant, on his fiery chariot,
the life -giving sun was intoxicated by the annihilation,
that was scattering…

And yet, I grabbed the right of happiness in my hand.
I grabbed it as it was spinning in the vortex.
And I held it tight.
I smelled it, and it smelled like the scent of the flower that was plucked,
I sucked and felt the coolness of the water, quenching my thirst.
It illuminated my world with golden, bright rays.

The wind did stop.
Rain began to water the soil.
It wet my lips with drops of promise and certainty.

The water was flowing,
and the unifying power mixed one by one the grains of the earth.
The laws of the universe worked.
Mankind had claimed happiness,
adjusting the measure and balancing the exaggeration.
Regeneration!