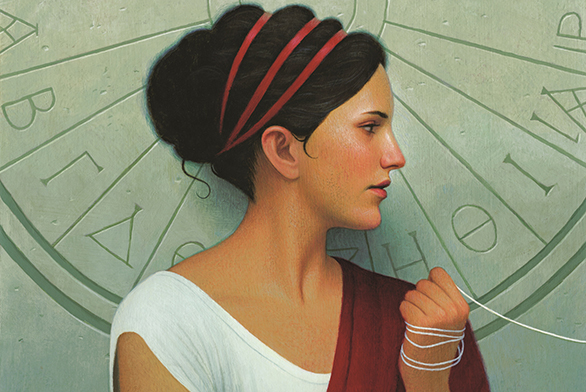 Penelope was the daughter of Icarios and Perivoia. She was also τηε cousin of the beautiful Eleni (Helen of Troy), because Icarios and Tyndareus were brothers.

Penelope was married to one of the heroes of the Iliad, Odysseus (Ulysses), king of Ithaca and the eminent hero of Homer’s epos, Odyssey. Odysseus was considered an extremely intelligent man and in fact he was the reason the Greeks defeated the Trojans after ten years of siege. His idea was the construction of the Trojan Horse, through which the Greeks managed to enter the walled city, surprise the Trojans, and decimate them. For his intelligence and cunning, the god Poseidon avenged him and punished him unimaginably, until his return to his homeland, Ithaca. The journey lasted ten years. Odysseus lost all his companions and met many seductive women and deities who held him captive with their charm. All adventures are described – as already mentioned – in the Odyssey.

Penelope, on the other hand, who was abandoned by her husband after a year of marriage and having a single child, Telemachus, waited for Ulysses for twenty years. She had no way of knowing what happened to her husband and simultaneously 108 suitors had settled in her palace and were waiting for her to choose one of them to marry, in succession to Ulysses. In her attempt to avoid them, she promised to choose a husband when she was going to finish the cloth she was weaving. In fact, she was disembarrassing it at night, so it never ended. The suitors found out what was happening, and she was forced to promise to marry the one who was going to win in an archery contest, in which they would use Ulysses’ bow. Of course, no one managed to stretch Ulysses’ bow until a beggar arrived, who won the contest and killed all the suitors. That was Ulysses himself.

Ancient Greek deity of the sea, who, according to the ancient poet Hesiod, was the son of Pontus (sea) and Gaia (earth). His wife was Oceanid Doris with whom he had fifty daughters, the Nereids, who were extremely beautiful. He was a force, beneficial to the sailors, he had the gift of divination and the ability to transform. He lived in the depths of the oceans.