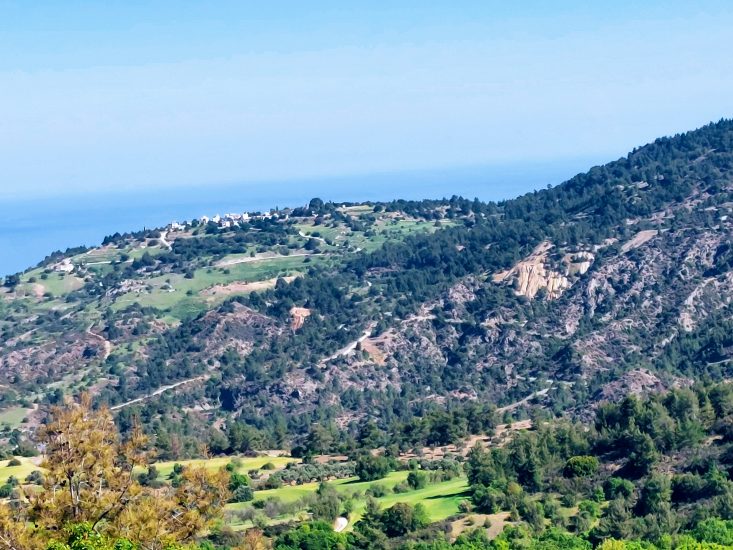 When there were no mobile phones…

It was summer, late in 1970s or early in 1980s when Stelios’ cousin, Maria, had come from Australia. Together with his other two cousins, Maria, and Monica, they had taken on the role of guiding her to their homeland, Cyprus. The parents of all four were originally from Paphos, so a main destination was Paphos and specifically the village of Statos – Agios Fotios or Ampelitis. This village was a newly established settlement, that was created after a subsidence in the 1960s, forced the residents of the two villages Statos and Agios Fotios to move higher and stablish a new village, with the help of the government.

Thus, on one of the highest mountain peaks of Cyprus, the new village was founded with houses subsidized by the state. Aunt Eleni, of the four cousins, along with her husband Aristodemos, had bought a small house there and renovated it, to have a cottage in the village. This small residence was given to them to have it as a base and from there to start their excursions.

Every night, they would return to the house, after all-day excursions throughout the Paphos district. Their youth and innate love for nature, brought ecstasy to their hearts, as they could enjoy the beautiful beaches of the small part of northern Cyprus, that remained free, after the Turkish invasion of 1974. It was not just for the cousin from Australia to discover this beautiful world. It was for all of them, as they had recently acquired their own car and could explore their homeland.

The lacy beaches, the clear transparent waters, almost always calm and immobile, the light, the vegetation, the shepherds with their flocks, were for all four a magic, which they sucked with all their senses and stored in their hearts. They experienced with ecstasy every beauty at a time when there were no mobile phones and social media to distract them. It was only themselves, their youth, and the beauty of nature. Magnificence.

In the evenings when they returned to the small house, they warmed the heat bather using woods, to take a bath. Then they prepared their dinner and before going to bed, they accompanied Stelios singing songs of Bithikotsis, Vicky Moscholiou, Haris Alexiou and generally all the famous singers of their time.

In the village lived some relatives, the cousin of their parents Neophytos Kazantzis (craftsman who made cauldrons) with his wife and daughters. They visited those hospitable and open-hearted people for Maria of Australia to see how the soutzoukos (a traditional sweet with grape juice and nuts, dried in the sun) was made, trahanas (broken wheat mixed with sour milk that dried on the roofs of the houses, which was used to make soup in the winter) and everything else that was traditional at that time.

One evening when they arrived at their house they found Neophytos the youngest, waiting for them outside. He was the grandson of Neophytos Kazantzis, around eight years old. He was standing impertinently outside the door. As soon as he saw them he began to speak with fury:

-The policeman came from Panagia (nearby, bigger village) with the Land rover and was looking for you. Your mam…

So, the cousins ran to Neophytos’ mother to understand what had happened. It was a great thing that a policeman from Panagia came looking for them!

Fortunately, this was not a tragic matter. Before they left for their holidays, Stelios had taken some exams at the Embassy of Italy for a scholarship in relation to technical issues, relevant to his profession. These exams were not formal exams with knowledge reports, etc. They were targeted, focusing on the IQ of the participants and their ability to find practical solutions to technical problems. He himself had no high expectations and had almost forgotten about it. To his surprise, not only did he had passed, but he was also the first. His family’s problem though, was how to inform him to present himself in the interview that was the next day. Phones did not exist.

The telephone network of the time was constrained to the cities. There, almost all the houses had a phone. But in the villages and especially in the remote ones, such as the villages of Paphos, there were no telephones. There was only one telephone booth in the center of each village. When someone wanted to call a resident of a village, had to know the number of the phone booth. When the phone was ringing in the phone booth, most of the times the owner of the coffee shop would hear it. He would answer it and call one of the boys playing in the street:

-Run and call i.e., Yannis,. that he is wanted on the phone.

The young boy would run, calling Yiannis and if he was found, he would come and talk on the phone. If not, the person calling, was staying in line until he got bored and shut it down. Here we should note that in some cases, the answering person on the phone did not know the basic, that is, how one should hold the headset, at what end one should be talking and from where to listen. So, some people were talking on the listening edge and putting in their ears the point for the speech. You can imagine the scene!

In other villages the phone was not near the café shop. When it rang only the children who were playing on the street could hear it. If they answered it, the same scene would be repeated. They were running, they were shouting, and the requested villager was coming. Besides, if someone from the village wanted to make a call, one had to put coins on the coin-operated device and feed it with new coins every time the relevant sign was heart. Because of all these, almost always the telephone booths  were out of order.

In the same way the device in the village of Statos – Agios Fotios was out of service. Family had no way from the city to call them and ask them to return. Aunt Vassilia, however, smart, and inventive as she was, thought to call the police station of Panagia and ask the policemen to go to the nearby village and notify the young holidaymakers about the important event. Then, so soon after the Turkish invasion of 1974, that almost everything had been destroyed, such an opportunity was rare.

So, the policeman came with the Land rover, asking where to find the youngsters or their relatives. When he found Kazantzis family he gave his message and left. In the eyes of little Neophytos, however, remained the impressive image of the policeman with the uniform and the Land rover. The rest did not interest him.

When the cousins were informed by Chrystalla, the daughter of Kazantzis and mother of little Neophytos, what had happened, they decided to return to Nicosia. It was already dark, but they packed their clothes, loaded the car, and set off. They wanted to notify that they got the message and would be back, but how? There was no phone.

-Somewhere we will find a working phone, they thought. We will pass from so many villages!

They began to descend from the shortest, narrow, winding road that it was suggested to them. This route included at least six villages, until reaching the motorway, going to Nicosia.

They stopped at the first village, Pentalia. No one was circulating. Everybody had gone to their homes. For their disappointment, the phone was not working.

They continued until the next village, Amargeti. At the same time, they were discussing the possibility if Stelios would go to study in Italy, they rest would go on holiday, as well. This expectation filled them with enthusiasm and unspeakable joy. Holidays in Italy! Who would ever have expected it!

The phone in Amargeti, not only was not working, but it was also rickety from its position. They stopped at the other villages they found on their way: Eledio, Axilos, Agia Varvara. Nothing. All the phones were dead and all the people in their homes. A slept population, away from the noise of modern life and unneeded information. At a distance of  20 to 25 km there was not a single phone working!

As they arrived in Timi, the largest village, they were finally able to call and notify that they were returning.

Late that night they arrived in Nicosia. The cousins lay down exhausted and the next morning they waited anxiously for the news for the results of the interview.

Like soap bubbles, their hopes and dreams burst when Stelios announced to them that his application had been rejected because he spoke neither Italian nor English. All that excitement, that overnight trip, the policeman with the Land rover, who had come from the nearby village, all in vain. Stelios did not speak English. Why this was not a mandatory condition from the beginning? No one knows. How did he not think about it himself? With such unexpected luck, who can think of this insignificant detail: how will you be taught if you do not speak the language?

And the lesson that comes out of it? Without phones, life goes on. Without a foreign language? Not so much! You must teach your children foreign languages. It is mandatory!