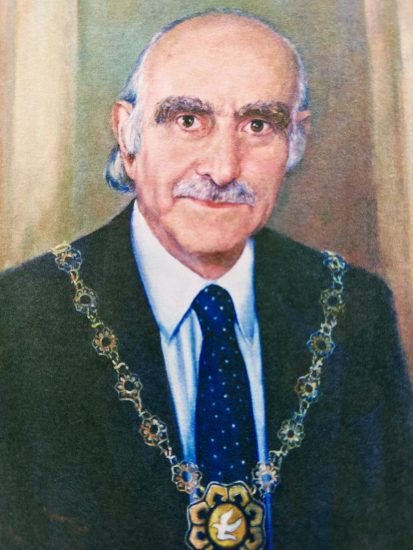 During his life he experienced all the historical moments of Cyprus of the 20th century and was an active part of the developments. During the liberation struggle of the Cypriots against the British he was a member of the EOKA organization and later, when the Republic of Cyprus was created, he was a member of parliament from 1960 to 1970. In 1971, the then President of the Republic, Archbishop Makarios, appointed him Mayor (for some time there were no elections in the local government due to the withdrawal of the Turkish Cypriots in 1963 and their confinement in enclaves).

As Mayor of Nicosia, he remained in this position for thirty-one years (1970 -2001), at first as appointed Mayor and later, from 1986 as elected. This position marked him but also blessed Nicosia with a brilliant personality with vision and determination. During his tenure, he was known not only in Nicosia, but throughout Cyprus for his ideas and the implementation of pioneering projects.

Among other things, he was the first mayor in Cyprus to promote the use of monuments for cultural purposes, starting with the Famagusta Gate, an entrance to Nicosia from the city walls built by the Venetians around 1567. This project was awarded by Europa Nostra.

In the same spirit of preserving cultural heritage, he promoted the maintenance of old buildings and workshops in the old town, which he converted into cultural sites, created the Laiki Geitonia (Traditional Neighborhood), within the core of the city, preached the first pedestrian streets, created theaters, museums, libraries, organized folk festivals, cultural festivals and much more. He also played a leading role in the founding of the Union of Municipalities, of which he was president until his retirement.

But perhaps his most important work is his collaboration with the Turkish Cypriot Mayor of divided Nicosia, Mustafa Akinci, for the operation of the Nicosia Sewerage System from 1977, very soon after the Turkish invasion of 1974, at a time when there was no communication between the two communities. This cooperation continued even after the completion of the sewerage system with the creation of the Nicosia Master Plan, which, with funding from international organizations, promoted projects in both communities, with the prospect that when the divided city unites, it will again be a single entity. For the completed projects and their cooperation, they received the international awards, World Habitat Award in 1989, Aga Khan Award for Architecture in 2007 and the prestigious Europa Nostra Medal of Honour in 2003.