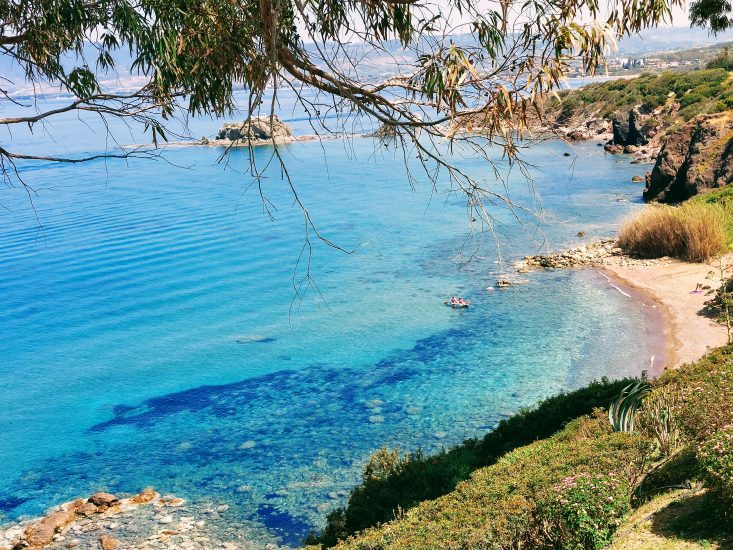 Leandros and the mermaid

Leandros lived in his village high up in the mountains of Paphos and knew the forest well. From the age of eight he was a shepherd and along with his goats he walked every day in the pastures of the village and watching the height mountains. Now, at the age of 14, his thoughts had become more complex and philosophical. As he saw the mountains standing there motionless, firmly, unchangingly, he felt safe and confident. Leandros was happy and satisfied. He had his goats, he had his grandfather, he had his village, he lived in the arms of the forest and the mountains, what else would he want?

-What is the sea grandpa? What are the fish?

-You’ve grown up now, my Leandros. Next time I go to Polis to sell my halloumi and sausages I will take you with me. In this way, you will learn the world outside our village.

Leandros was thrilled. He would learn the world outside their village! Great thing he thought. He would also know the sea! He would see the fish!

He agreed with his friend, Philippos, to graze his goats. After explaining to him that Kokkinoula had a limp leg and he should take care of her, he started with his grandfather for Polis.

They had with them their donkey loaded with halloumi, sausages, and everything else they had to sell. They both walked next to their donkey. Leandros kept asking his grandfather about the sea and the fish and grandfather replied:

-Don’t be in a hurry. Tomorrow, when we arrive, you will see the sea and the fish. And then you will know what this beast is.

-Beast, because when she gets angry and roars, she swallows the sailors and their ships, replied his grandfather.

Then, other questions were beginning. How do the ships look like, who are the sailors, why the sea gets angry and a lot of questions, from the child who knew only the steady mountains and the immobile trees.

At night they slept in a small clearing in the forest. Grandfather slept, that is, because Leandros had such an anciency that he could not sleep at all. As they woke up in the morning, they ate from the olives and bread they had with them and set off.

They had come out of the forest and had begun to descend to the sea. In the background she was distinguished, as a continuation of the blue sky, only in darker blue, and grandfather showed her to Leandros. At first, he could not understand the difference with the sky but little by little he discerned the invisible line that separated the two: the sea and the sky.

Leandros’ enthusiasm was so great that he did not pay attention to the immense beauty of the landscape: the alternating shades of green, as there were clusters of dark pine trees, silver olive trees and green cultivated areas, where the fields were adjacent to the river that came down from his village. From time to time some rocks, which stood for centuries in the same position, mark out the landscape.

Grandfather, seeing the euphoria of his grandson, began to talk to him about the mermaids. And little by little, realizing the excitement and ecstasy in Leandros’ eyes, he continued with the story that captivated him when he first heard it:

-Once there was a king, called Alexander the Great and lived in Macedonia. He began to conquer the whole world with his intelligence and strength. He even accomplished the impossible: to secure the immortal water, so that he can live forever. Before drinking it, however, his sister accidentally threw it away. When she realized what she had done, out of her sadness, she jumped into the sea and became a mermaid. From the waist up she was a gorgeous girl, with long blonde hair and blue eyes and from the waist down,a fish. Alexander the Great, no longer having the immortal water, died young. The sister’s pain when she found out, was unbearable. She would stop every ship she found in her way and ask the captain: Is King Alexander alive? If he told her that she is not alive, she would get angry and sink the boat. If he said to her: He lives and reigns and conquers the world, she would rejoice and appease his ship.

From this magical story, what Leandros holt was the mermaid and her beauty. He kept asking his grandfather about her, but it was difficult to create an image, since he did not know what the sea is, nor what fish is.

At noon they reached the sea. Leandros first smelled it and then saw her. Its smell was cool and stimulating. The saltiness emphasized his senses and he thought that this is how women should smell. As he saw her, however, he exclaimed:

-Grandpa, she’s alive! She moves up and down.

-Take off your shoes and put your feet in the water, grandpa told him. But don’t go too far because you could be drowned.

Leandros immediately took off his shoes and put his feet in the water. It was cold, but as the wave caressed him, he felt all the fatigue from the two-day walking, leaving him. He splashed happily and did not want to leave.

-Grandpa, where is the mermaid? He asked.

-You won’t see the mermaid. Only the captains deep in the sea can see her. Let’s go. We will visit the harbour to see the fishermen who came with their catch and don’t worry, the sea is also there.

With some reluctance, Leandros, wore his shoes and followed his grandfather. They walked for about a quarter of an hour and reached the harbor. The fishermen had returned with their catch and were touting their merchandise.

Grandpa took him and showed him the fish and their tails.

-Mermaid is like this, he told him. She has no legs, she has a fish tail, she swims all day in the sea, and she is looking for the ships that pass by.

Leandros was amazed at the fish and their tails. He was trying to form the image of the mermaid of King Alexander’s sister, with her long tail and blue eyes. She exerted a charm on his teenage mind and for the first time he felt something inside him flare up. Maybe it’s what they call “love.” The desire to get to know her surpassed him.

-Come, grandpa told him, to go to the bazaar to sell halloumi and the rest that we brought.

-You go. I will stay here and look at the sea. Who knows?. I may also see the mermaid.

-The mermaid doesn’t come out here, his grandfather told him. But stay if you want. I’ll come back to pick you up. Just don’t leave here and do not go into the sea. The Polis is big, and you will be lost.

Grandfather, after leaving, began to wonder if he did well to talk to Leandros about the mermaid. He had seen how he had been captured by her image.

-He will forget about it, he thought and continued for the bazaar.

When he was left alone, Leandros sat on a stone and looked at the sea. His gaze was gathered in the background, where it seems there were some rocks and as the wave popped on them, a white foam spread every now and then, coloring the deep blue. Leandros thought that there must have been the mermaid and beat the water with her tail.

He imagined her svelte, with her long silver tail hitting the wave and rising to the surface. Her blonde hair spreading on the surface of the water and her face adorned with water drops. Her blue eyes shining under the sun and from her wet lips dripping all the pleasure that his unmatured teenage heart could imagine.

It took two hours for his grandfather to return, and Leandros sat motionless, looking at the sea and waiting for his vision to emerge. His grandfather’s voice awakened him from the dream and reluctantly followed him on the return journey.

As they walked, he was silent. Grandpa was trying to get him to talk but Leandros answered in one word. All he asked was when they would come back to sea.

-Fairy tales, he told Leandros, when he tried to describe to him the charm of the mermaid.

So, Leandros decided not to talk to anyone again, about the mermaid. He would keep her vision of himself.

In the evenings, he would see her emerging from the seabed, full of beauty and allure, and ask him:

-He lives and reigns and conquers and the world, he answered back.

So, every night, in his sleep, he would meet her and think about her every day. He had begun to languish.

Grandpa tried to cheer him up, but in vain. Leandros was possessed by the melancholy of unfulfilled love.

One day, when he went to the spring of the water, he saw her. She was there, with the other girls of the village and she was filling her pitcher. Her blonde unruly hair was thrown out of the shawl that covered her head. Her blue eyes shone as she laughed, and her lips dripped with pleasure. She was herself, he recognized her. He looked down, searching for her tail, but he just saw two legs.

His heart flared up. His mermaid had become a girl and was here in his village. He felt the power of the forests filling him again and the security of the mountains surrounding him. The spell had been solved.

The years passed and Leandros married Susana, as the girl with the beauty of the mermaid, was called. He lived happily by her side, he had children with her. He never went down to the sea again.

Some evenings, however, when there was a full moon, the mermaid would come to his sleep. Drops dripped from her face and her pleasing lips asked:

-He lives and reigns and conquers the world, he answered back.

But he immediately woke up and turned to the woman who was sleeping by his side. He heard her calm breath, hugged her, and she whispered something in her sleep. His own mermaid was not the vision sister of King Alexander. She was his Susana, and every molecule of her body was flesh alive.

2 responses to “Leandros and the mermaid”