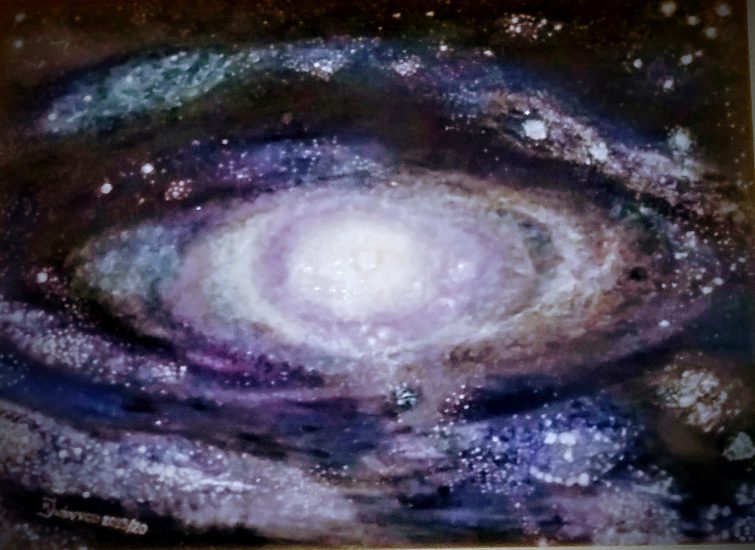 Once upon a time, there was a little girl named Eurydice. Eurydice had a grandmother called Eurydice. Grandma and granddaughter were close. Every night, little Eurydice used to sit on the porch and her grandmother was telling her stories about the stars. As she looked enchanted at the sky, she heard about our solar system, about galaxies, about constellations and all the mysteries of the universe. Eurydice had no other brother or sister, and their home was far from the city. The starry sky every night was for her all the riches of the world, and nothing was missing from her life.

When she would later go to bed to sleep, in the silence of the night she would hear nothing but the crickets, stare out the window at the stars in the sky and without understanding how, she would fly over the earth and get lost in the firmament. At first her travels were close, up to the moon, but then she dug up and went farther and farther and farther. She had no problem moving, breathing, or travelling distances. You see, little Eurydice did not know that all this cannot be done, because the laws of physics do not allow it. And because she did not know it, she could beat every law.

On one of her travels, she dared to descend to a strange planet. She was impressed because the atmosphere and water were green instead of blue. On this planet grew huge red flowers and all the birds had yellow and blue wings. It was beautiful. She liked it so much that she used to go there every night.

One day as she was wandering through its magnificent fields, where the grass was deep green and looked like velvet, she met a boy. A beautiful boy with green eyes, transparent white skin, and red full-curly hair. At first, she was scared, maybe she was embarrassed, because she was in her nightgown, but he approached her and with the tips of his fingers touched the tips of her own fingers. She immediately felt her mind open and could listen to the thoughts of his mind. It was as suddenly they started talking without using any language. Her heart filled with warmth. It was so nice for someone to come into her head and listen to what she was ashamed to say. And it was so nice to hear the thoughts of her new friend that sounded like gurgling water and with their crystal-clear echo filled her soul with joy.

His name was Angelos, and he was looking for company, too. In the unique way the two of them could communicate, Angelos was talking to her about the universe. He was trying to explain to her that beyond the beauty they could see around them, there were laws and powers that dominated the universe, and all things were the result of a pansophical symmetry and analogy that was difficult to be understood. Beyond what she could see with her earthly eyes, there was much more she could not see. “It’s all relative,” he explained. “You are burned by the heavy matter of the universe, and what you see and understand it is made of this matter, and you can understand the forces that come from or are produced by this matter.” “But this matter makes up 5% of the universe” “And what is the rest?” asked Eurydice enchanted. “The remaining quarter of the universe is what your scientists call dark matter and as much as remains, that is, three quarters, what they call dark energy.” “You see, the matter that you are burned does not let you understand the whole universe, but a small part.” “What are you made of Angelos?” asked Eurydice. “How do you know all this?” The tips of Angelos’ fingers moved awkwardly for a moment, and then the sounds from his mind filled Eurydice’s wondered mind. “I, my dear Earthly friend, am one of all the components of the universe. That’s why I’m not talking to you with an earthly sound, but with the sound of the spirit. And you understand what I want to tell you, because what you earthlings call a soul, is nothing else but a mixture of dark matter and dark energy. These are, of course, the names given to them by your scientists. In fact, it’s far from dark. They’re full of spiritual light. But you don’t know the essence of these two, and that’s why you suffer so much on earth. But you, my little friend, are pure, and you can understand.”

Such discussions were sometimes very advanced for Eurydice. But she was filled with happiness, and she liked it. She knew one day she would understand more.

Sometimes he used to take her by hand, they travelled farther and went to other galaxies. They were moving through the starry firmament and played through the vast void, twirling, while thousands of stars glowed around them. Sometimes Angelos would take her to some places he called “strings” and from there they rolled like a slide to distant parts of the universe. The surrounding wonders were incredible, with stars shining in dazzling light, like thousands of suns and others dissolving and filling the space with debris, fire, and gases. Eurydice liked the throbbing stars, which her grandmother called “pulsars”, which with their long tails of pulsating light adorned the universe, like the most excellent fireworks.

Their boldest achievement was when Angelos taught her how to pass through black holes and travel to other universes. At first Eurydice was afraid. It was so dark in those holes, and they were pulling you as the sink pulls the tap water. But Angelos held tight to her hand and took her with him. It lasted a millisecond, and then they were in another world. As he explained to her, as they passed through the gate of our universe to find themselves in another, she should not be afraid of anything. This was a new universe, and all things and living creatures would be made of a different matter. They would not see them, they would not listen to them, they would not smell them. Angelos had the knowledge so that they themselves could see, hear, and smell, but she should never have tried to go alone. It had not been permissible for the people of the earth to cross the universes yet. Eurydice was the chosen one. Because Angelos was her friend. And because she was not afraid. She was courageous.

The other universes, on the other side of the black holes, were so different! Each had its own magic, its own beauty. What made the greatest impression on Eurydice was the transparent universe. There all the things, all the animals and all the material beings and plants, were transparent. They looked like they were made of glass, and everything was flying in a gelding atmosphere that looked like water. The colours were like bright bundles that penetrated the transparent matter of beings and sparkled dazzlingly. In this glass world you could slip as in an undisturbed lake, having the immense beauty surrounding you, while every sound had a crystal-clear texture. This universe was dominated by light.

In another universe everything flowed on flat surfaces that swayed wavy, as if dancing to a universal rhythm, with sounds and music that vibrated in the space. All beings emitted vibrations that filled one’s soul with a thousand of emotions. The light did not dominate here, the sound dominated. It was the universe of sound and rhythm. In that universe, the soul of little Eurydice felt so much happiness that she did not want to leave. But Angelos pulled her away. “Now,” he told her, “You don’t belong in this universe. You’re human and made of earthly matter. Maybe when you die, you’ll come here. Now you can’t do it.’

And then Eurydice heard for the first time, the word I am dying and death. But it did not cross her mind that they were about something bad. It was just the transition to another universe, which was so wonderful.

Once they had visited another, strange world. It had the most special form of everything they had ever seen. It did not have any shaped beings. Everything looked like air masses in different colours, moving through space and changing shapes and forms constantly. What dominated this world was emotions. Once you were there you could feel so strongly in your heart what are love, hope, affection, but also anger, hatred and greed. The strange thing was that you could always choose what feeling could bring to your soul warmth, what could make you happy. And certainly, neither with anger, nor hatred, nor greed could make one happy. It was the universe of emotions, feelings, and discrimination. Here, Angelos explained to her, that the souls of the earthly beings were coming to be taught, when the experiences of their lives were not able to teach them: where happiness lies. And oh yes! Here Eurydice experienced absolute happiness because she chose the feelings of love and creativity. This universe was made, as Angelos explained to her, by the excesses of the feelings of people who die, in our universe. It is the only form of matter that remains unchanged after death. Everything else becomes dust in the universe.

That is how the days went by, but above all the evenings, of Eurydice. She was listening from Grandma the stories about the universe and at nights with Angelos, she was able to live such experiences that no human being had ever lived before. All these trips made her lonely, but happy.

The way she had learned to communicate with the Angelos, with the touch of their fingertips, taught her that touch is also a sense of communication. She had learned to touch the leaves of plants tenderly, to caress the liquid surface of the water imperceptibly, and through the waves she received she could communicate and learn about the matter of beings and the vibrations they emitted.

All this course of her life had made her a special person, with a heart full of understanding, but deep down shy and restrained. She knew she could not talk about all this to anyone, because they would not believe her. Even her beloved grandmother, when she tried to talk to her for the first time about her wonderful travels, considered them dreams. Little Eurydice was smart. She realized she should not be talking, just being experiencing and learning.

Slowly – slowly, the time has come when Eurydice should go to primary school. For the first time, her free soul would have to face the tightness of space and the formatted knowledge.

The school experience was quite different from what she had known and had learned by then. She could no longer travel away in the evenings on interplanetary and inter-galaxy voyages, and slowly lost contact with Angelos. It did not matter, though, she realized that she would have to adapt to her own world and knowledge of her own race. Thus, in the future as a scientist, she could give the experiences of her childhood in a way understandable to other people and above all to other children.