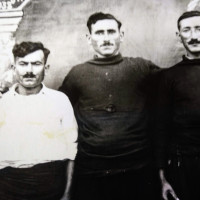 At that time, Cyprus was under British colonialism. After centuries of Turkish occupation, Cyprus was ceded to the British Empire in 1878. The hopes of the Cypriots that the new master would be better were dashed. The new regime was equally oppressive and the inhabitants, particularly of the countryside, lived in poverty and illiteracy. Their every income came from the cultivation of their land, and every time there was a drought – which was not at all rare – the farmers were left without income and the necessities for their livelihood.

In October 1931, a mob of patriotic Cypriots tried to occupy the Governor’s Palace in Nicosia, and the British violently tore them apart.

Between 1931 and 1933 in Cyprus there was a profoundly serious drought, the most serious of the 20th century. The farmers of Cyprus, Greek Cypriots and Turkish Cypriots had no support and many emigrated.

I quote an article by Peter Papapolyviou, “On economic crisis, 1933” very enlightening for this period. You can read the entire article by following the link.

“Many analogies and similarities with the current situation can be found in the great economic crisis of the interwar period, which also hit Cyprus since 1929 in the wake of the stock market crash, and peaked in 1932, as it was combined with the prolonged drought that hit agricultural production.

At the same time, the great hoarseness of the Cypriot farmer remained, in the first decades of The British Colony, the usury. According to government calculations in 1929, before the economic crisis, which dramatically exacerbated the situation, only 18% of Cypriot farmers were not indebted to the loan sharks.”

More information about this season can be found at the following links: