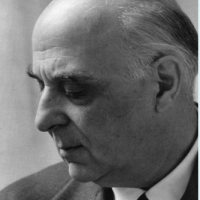 George Seferis is the first Greek poet to be awarded the Nobel Prize in Literature in 1963.

He was born on March 13, 1900 in Izmir and died on September 20, 1971 in Athens. His father was a lawyer. The family left Izmir in 1914. George Seferis finished school in Athens and then studied in Paris and London. In 1926, he entered the diplomatic corps and worked as a diplomat from various positions in many countries.

He wrote various poetry collections (Turning point, The Cistern, Mythistorema, Book of Exercises, Logbook A, Logbook B, Thrush, Logbook C – originally titled Cyprus, where it was decreed by Apollo that I should live…. – , Three Hidden Poems).

George Seferis was particularly associated with Cyprus. First as Greece’s ambassador to London, from 1957 to 1962 and later as a poet. He visited Cyprus three times, in 1953, 1954 and 1955. In 1953, his friend and painter Adamantios Diamantis accompanied him all over the island. The poet was impressed by the island and its people and wrote his poetry collection, Logbook C – originally titled Cyprus, where it was decreed by Apollo that I should live…

There is much that can be written about this great poet, but I urge you, if you want to study more, to refer to the publications below, from which I drew information, as well as to others.

I close with an excerpt from the book: Adamantios Diamantis and George Seferis, CORRESPONDENCE. In this passage, George Seferis describes the fact that inspired him to write the poem “Details in Cyprus”, which is dedicated to Diamantis. The relevant excerpt, from the poem, follows:

… It was an orchard that seemed uninhabited; In the middle there was an old wooden well- wheel, from those that in Cyprus are called “alakatin”. All wood, nothing iron on it, not even a nail, and buckets of clay. Diamantis tried to turn it around; the wood crackled. He left it, and stroked it with affection, you would think it was his own friend. That is when I felt of what his painting feeds on and how his life is united by his art.

……………………………………
All this was fine, a casual stroll.
But the wooden well-wheel – the alakatin”-
asleep in the shade of the walnut tree
half in the earth and half in the water
why did you try to wake it?
You saw how it moaned. And that cry,
brought forth from the wood’s ancient nerves,
why did you call it the voice of our country?