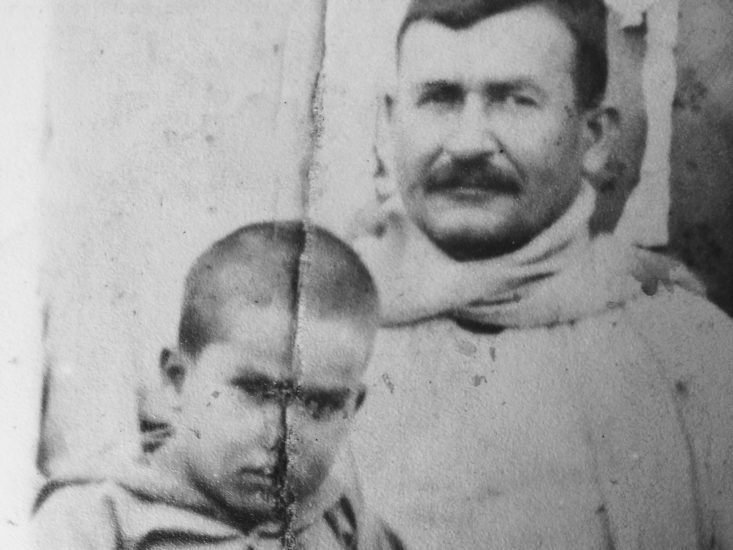 Dedicated to my cousin Sotiroula who lives in Australia and taking advantage of the memories she saved I wrote this story.

The afternoon reminiscence of his life upset Nikolas, and in the evening, he was a bit uneasy.

—What’s wrong with you, Nicolas? You’re very quiet, asked him, his wife Milia.

—I have a headache, he replied. I’m going to sit in the yard for a while and get some air. You may lie down.

Milia (from Emilia), Nikola’s second wife, tired like any woman in the village, who used to work in the fields and take care of the house, lay down early.

He went out, sat in a chair, and looked at the starry sky. In the darkness of the night, millions of stars glowed above his head. A bright strip of countless stars crossed the sky and seemed to split it in two.

Nikola’s soul was romantic. He immersed himself in the beauty of the fixation and slowly – slowly his heart calmed down. Thoughts shook his mind and travelled him back to those distant years when he used to live in Skala.

After his mother’s death, Nicholas wanted to leave Skala. Where should I go, he was thinking. I don’t have family anywhere.

One day, came to the shop where he worked, a peasant. His name was Georgi, and he was coming from Marathovounos. He had never heard of this village before.

—It’s situated in the plain of Mesaoria, Georgi told him. Big village. It has close to 800 inhabitants and is centrally located in the area. We don’t have a dyer of vrakes (loose traditional trousers) in the village. If you come there, you’ll have a lot of work. People will come from the other villages too. You won’t be able to catch up with them.

—But how can I come if I don’t know anyone. Where am I going to stay?

—Live that to me. You’re a handsome man, you’re a good worker. I’ll find you a wife.

Nicholas did not take long to be convinced. He decided to spend the two gold pounds his father had given him. He bought a cart, a donkey and all the equipment he needed to start his craft. He said goodbye to Mr. Lefteris, Mr. Christo and his wife Eleni, his friend Dimitris and followed Georgi to his village.

It was the first time he has been away from the sea. It was summer, like now. As they moved away from the city and left behind the plantations that greened the landscape, he was taken aback by the monotony of the plain. Everything seemed colorless under the scorching sun. From time to time, an olive tree with its silver- green colour broke the monotony of the pale-yellow grain. They saw the shepherds who with their sheep crossed the plain. Some of them sat under an olive tree to rest and played their pithkiavly (reed flute). The bleating and bells of the sheep accompanied by their sounds the bucolic scene that Nikolas saw.

He felt strange. He lacked the sea, its sound, its smell. He quickly dismissed those thoughts. He had made his decisions. Marathovounos, this village he had not seen yet, would be his village. At that moment, he decided never to talk to anyone about his childhood in the consulate. And he never spoke. He was not even thinking about it. Up to this day.

—You’re old, Nicolas, he whispered to himself. Go to sleep.

He walked in and lay down next to his wife, Milia. He tried to sleep, but he could not. The memories, now that have been woken up, suddenly took all his energy and captured his mind.

Thus, a prisoner of his thoughts, he closed his eyes and continued to remember.

It did not take long for him to get married. He and his first wife had two daughters. The first one was named Margarita, after his mother, and she was called Markarou, as his mother had been called. The second one was baptized Andriani and was called Andrianou. His first wife died young, and he was forced to remarry. He took Milia, and with her we had five more children. Three daughters, Lazarou, Stavrou and Eleni and two sons. Konstantis and Vangelis. Vangelis died young. He was very bitter about his death.

Thoughts began to blur slowly – slowly in his mind and Nicholas fell asleep.

The house of Nikolas and Milia was on the main road of the village. Next to the house, Nicholas had his shop. He worked there for many years. His business was going well. His clients were not just from Marathovounos. They also came from the surrounding villages, Agastina, Vitsada, Giaos and Musoulita, even from more distant villages, such as Kalograia, Tripimeni and Agia Marina. At that time, people were poor and often had no money to pay. So, they brought him as payment the products they produced, such as oil, olives, legumes, and fruits of the season. Their house was always filled with goods and his children always well-fed.

He had no fields of his own, but his wife Milia had her dowry in fields and animals. He has never been involved in agriculture and livestock farming. His wife took care of their fields and animals, along with her children and some assistant boys, whenever they needed to. He knew that the villagers were making fun of him that once his wife had sent him to check if the crops were ready for harvest, and he, not understanding, replied negatively. By the time she went to see herself, the grain had matured and been destroyed.

But he did not care. He was proud of his craft, which provided his family with sufficient financial comfort. He was also fond of learning. He had met the village teacher, Demofon Lazaridis, who also came from Larnaca, and became friends. Lazaridis would bring him a book from time to time to read. Thus, he found out where Sweden was, how cold was there and how people used to behave in this faraway country.

As the years passed, the village grew and its inhabitants were increased. By the beginning of the 20th century, they had exceeded 1200. Nikolas became an important resident of Marathovounos. The villagers appreciated him for his character and humanitarian behavior and for many years he was elected as mouctar (community leader) of the village. He collected the taxes for the British, the one called “decati”. This tax required each farmer to give one tenth of their production to the State. Nicholas was fair to everyone, but above all he was flexible where there was poverty and need. He had also built a big clay jar in the wall of his house, and inside he kept the money from taxes. It was some kind of safe.

In a few days, his daughter Lazarou would be married to Yiannis, the son of Stavrinos Tyllyros and Styliani from Kaimakli. Stavrinos was his friend and he greatly appreciated him. He, too, had lost his first wife and got a second one. From his first marriage he had a son called Kleanthis and from his second, two sons, Elias and Yannis. But it was the opposite of Nikola’s, as far as the occupations are concerned. He was also handsome and tall, but as a man of the plain was also the first harvester in the village. From this ability he took the nickname Tilyros.

So, his daughter would marry Yannis soon. He chose this young man for his daughter for many reasons, but above all because Yiannis was a craftsman like himself and a particularly good man. He was a shoemaker. He manufactured and repaired shoes and boots. He would open a shop next to his and share the customers. A craftsman would always be able to secure what is necessary for his family. He would not have to wait to be sufficient rain to make the earth fertile, so the family would have enough to eat. Though people were poor, they could exchange products to buy the goods they wanted. That would be an insurance for his daughter.

Yiannis had his own house. In fact, he and his wife would share his parents’ house. But this was large, it had a basement, and a first floor with many rooms, a separate kitchen, a separate room for children, a dining room, a separate room for grandpa and grandmother, warehouses for cereals and two stables for sheep and donkeys. For that time, when people were poor, the house his daughter would live in, was like a palace. They would of course leave his daughter as a dowry the house where he lived with Milia, but now they would not have to move. Sometimes he was thinking he did not have any real estate to give to his children. It was all from Milia’s dowry.

Living among farmers and ranchers, Nikolas heard many times about the good and the bad seed. He knew that the seed determined the quality of the crop and that in a small seed hides all the power of production. That raised a question in his mind. What is the seed that makes the man? Would his Swedish father’s seed change anything in his generation?

So, he asked the teacher:

—What’s the name of man’s seed? How many generations does it stay in man?

Lazarides looked at him in surprise. It was not a common question for a peasant. On the other hand, Nikolas was not an ordinary peasant. Not in appearance, not in the way of thinking.

—The seed of man, the one that is transferred from generation to generation, is called “genes”, he replied. These are always in people’s blood, no matter how many generations pass. Other genes are added as people marry and reproduce, but they are never lost. Why are you asking?

—Just to find out, Nicholas answered and closed the conversation.

It has been many years since. Nicholas and his children have died. The Turkish invasion in 1974 came, Nikola’s grandchildren and great-grandchildren became refugees, and Marathovounos was turned into a camp for the Turkish conquerors. All property was lost in one day.

But life cycles are concentric and interconnected. One random day, years later, a great – great – great-grandson of Nikolas, inside a clinical laboratory, discovered the connection between their genetic code and distant Sweden. And so, it seemed that above all properties, even above one’s homeland, genes prevail over the existence and the course of each person.

Information about the village of Marathovouros was obtained from the Great Cyprus Encyclopedia, Volume 9, page 311

Photo represents grandfather Yiannis with his youngest son, Costas, who was my father.