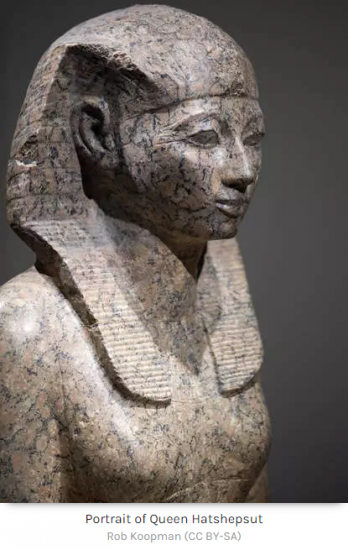 By the Voice of Hatshepsut

In 2006, Egyptologist Zahi Hawass found, located on the third floor of the Cairo Museum, the mummy of the woman Pharaoh Hatshepsut. With the method of DNA, from a tooth that was found in another place and belonged to her, and with the identification of the DNA of the mummy that belonged to her grandmother, her identity was confirmed. Hatshepsut was born in Egypt in 1508 BC and was the daughter of Thuthmose I and Ahmose. She married her half-brother Thuthmose II. Hatshepsut ruled Egypt from the death of her husband Thuthmose II in 1479 BC and for a period of 22 years, until her own death in 1458 BC. Her successor Thuthmose III tried to erase her name from history and so no one knew about her existence before the 19th century, that Jean-Francois Champollion, deciphered the Rosetta column and archaeologists were able to read the hieroglyphics in the temple of Deir el-Bahri, which she constructed.

“That’s how I sit in my palace and think of the one who created me. My heart has appointed me to erect for him two obelisks of amber… my spirit has been shattered in the thought of what people will say when after many years they will see this monument and talk about what I did…”

(On the base of an obelisk in Karnak)

Hatshepsut woke up from her deep sleep that lasted, 3500 thousand years. She heard her name pronounced, and her soul rejoiced. At last people knew her. At last, she could travel to the world of the dead and live in eternity.

The view she experienced was unlimited. She saw the Nile flowing and watering the land of Egypt. She saw the curvature of the ground stretching and forming the sphere of the Earth, the planet on which she lived, 3500 years ago. Beyond that, she saw the vast universe, with other planets and stars shimmering. This perspective impressed her. The world with the eyes of the soul is much bigger than what she knew…

But she focused on her homeland, Egypt. She singled out the pyramids of Giza, standing proud after so many years and dominating the desert. They no longer shone white, under the sunlight. The limestone lining had been removed, as the gold-plated stones on top of them. But they were there, even without their former glamour. Modern people were studying them, looking to learn about their culture and roots.

Hatshepsut remembered the years she reigned in Egypt. She had been born a princess. Her father was the great Pharaoh Thuthmose I. At the age of twelve, she got married to her half-brother Thuthmose II. Together they had two daughters, Neferu-Ra and Metrote-Hatshepsut or Hatshepsut II. After this development, her husband appointed as his successor his son Thuthmose III, who he acquired from another wife, not from her. When Thuthmose II died, Hatshepsut, as the royal wife, began to run Egypt as the guardian of Thuthmose III, who was an infant.

Her position was difficult. In a country and at a time when no woman was allowed to govern, Hatshepsut had to impose herself. She initially ruled as a representative of Thuthmose III, but after about two years, she was proclaimed pharaoh and received all the titles. To stabilize her position among her people, she first arranged a marriage between Thuthmose III and her daughter Neferu-Ra. She then presented herself as the daughter of the god Amun, who in the form of her father, Thuthmose I, fertilized her mother. She made sure that she appeared on the statues in the form of the pharaoh man, bearing a beard, and wearing a male uniform. In the past of Egypt’s history there were still two women who ruled the country, but as representatives of pharaohs – children and not as  proclaimed pharaoh – women, with all the titles.

Hatshepsut, despite the image she created for her people, never denied her feminine nature. In some statues, with which she herself would like to go down in history, a woman is presented, full of elegance, grace, and charm. But she did not stop there. Womanhood is not just about appearance. It has to do with psychosynthesis and the qualities with which she expresses herself.

She initially followed in the footsteps of previous pharaohs, imitating her father, and did some military operations, in Syria and elsewhere. But she soon realized that it was not what she wanted for the country and its people. Every military operation has a cost in human lives and resources. She chose the welfare of the country and its people. She left relative autonomy to the countries that were under the rule of Egypt and focused on the erection of monuments that people admire to this day.

Building the most beautiful monuments of Egypt, she not only glorified her name and reign, but created jobs for her people, contributing to their prosperity. Her works are the temple of Deir el-Bahri in Thebes and the temple of Luxor, dedicated to the god Ra. In the complex of temples in Karnak, where all the pharaohs added something new, Hatshepsut built Maat’s palace, which she filled with frescoes from her achievements and religious ceremonies performed with her successor, Thuthmose III. It should be noted here that she never tried to sideline her successor. Instead, she shows him participating with her in all the ceremonies she performed as a supreme priestess. Perhaps, the reason  he tried to erase her name from history, was not out of hatred to her but because with her feminine status she desecrated the acceptable succession of pharaoh men.

Her work did not stop there. Her greatest achievement is the exploration of other countries and the establishment of trade relations with the land of Punt. Until recently, this land was considered a fantastic place, but modern archaeological discoveries have confirmed its existence and its commercial relations with Egypt. It has been found in a cave, on the shores of the Red Sea, the wreck of a ship with packages of goods that have inscriptions that refer to the land of Punt. In addition, an analysis of the DNA of an Egyptian baboon mummy, which is now in the British Museum, confirms the origin of the animal from an area in the Horn of Africa, identified with Eritrea or Eastern Sudan.

With these expeditions the Egyptians brought exotic animals and plants that were later grown in Egypt, as well as frankincense, gold, ivory, ebony, leopard skins and baboons. Baboons, although considered sacred animals in Egypt, do not originate from there.

Hatshepsut stopped remembering. She looked again at this sphere that was spreading in front of her and was much larger than Egypt, her homeland. It surpassed the distant land of the Punt and curved, returning to Egypt. Fires and smoke were rising from everywhere. People were still, after 3500, waging wars and being killed between them. In a much more violent and much more destructive way, now. Her female heart was broken. She envisioned the future and exclaimed:

“I, Hatshepsut, the First among noble Women, predict that this sphere called Earth, will know peace only when a woman will rule. She should exercise power with her feminine existence and not imitate men and their characteristics. Her womanhood will lead her to take care of the well-being and freedom of peoples. Then I will come back to stand by her side.”

And she perished in the world of spirits, thanking modern people for her deliverance from the level of non-existence, by giving her back her name.

Punt, Hatshepsut and the photo