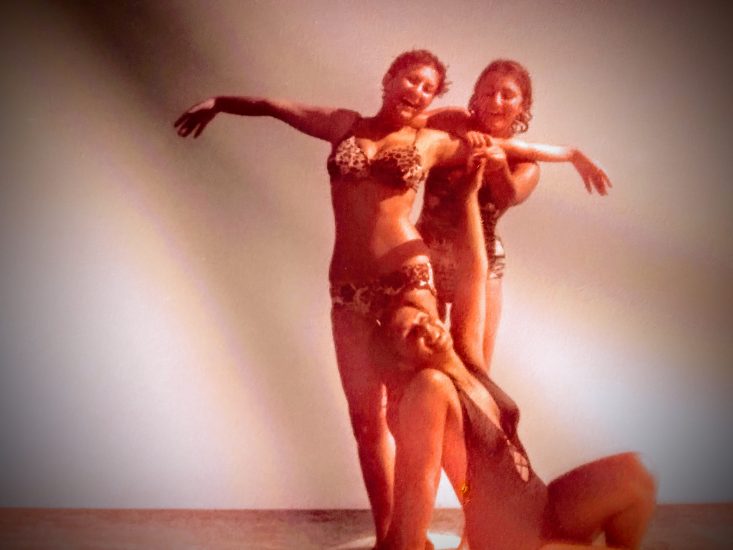 Dedicated to the memory of Alice with a lot of love and nostalgia….

Once upon a time, when there were no mobile phones, no internet, no social media, and people were communicating in person, four girls chose Paphos for their holiday. The city of Paphos then, had only one three-story building and three or four hotels. They chose the cheapest one, called “Paphos Palace” and booked two rooms. They boarded the small mini minor, owned by one of them and carrying their luggage on their legs, they arrived in Paphos, after a long journey of three or more hours! That is how far Paphos was then!

And now a short parenthesis to put our story in time. The time was June 1975, the place the island of Cyprus and the circumstances tragic. In 1974 the Turks had invaded Cyprus, they had occupied almost half of the island, there were refugees everywhere who lived in camps and tents, there was poverty despair, missing persons and some young people who saw their dreams become shattered.

Yet our story is not tragic. It is the victory of the power of the youth against the tragedy of destruction. “Paphos Palace” hotel was in the town square and was a stone building of the last century. Entering the hotel were greeted by two old ladies and an old gentleman, who were the owners. They showed them to their rooms on the first floor. It was a very wide corridor, and, on both sides, there were rooms. Maybe six, maybe more. And that is when the surprises started.

The rooms had no bath, or toilet! You should use the shared ones that are in the hallway – explained one of the owners. But do not worry. If you need to go to the toilet at night, we have put you in a night pot and showed an enamelled beige container. Our girls were shocked. “No – no, take it away! We’re not going to the bathroom at night. But you know, we’d like to have a bath…”

“You can’t bathe every day,” the owner explained. “The water tank is heated with wood, and it is not easy to warm it up.”

Yes, at the time there were no mobile phones, no internet, but our girls wanted to bathe every day! Besides, they were on holiday at sea. How could they not have a bath! After the first shock on both sides, the owner muttering with displeasure gave instructions to heat the tank and to warm the water.

The first evening passed and at breakfast our girls sat at the same table as the strange owners (they were, you see, the only customers). During the conversation, and not being able to hide their feelings about the hotel, they were attacked by the owners: the king of Egypt Farouk* had stayed in this hotel, and you do not like it! It is unacceptable!

Our girls stayed another night at the hotel – once accommodated the King Farouk – and decided to leave. Their budget was minimal. They counted their limited money and booked for the remaining four days of their holiday in a more expensive hotel: The Axiothea hotel. This was brand new with a fantastic view, a little above what they could afford, but what to do?

But, as we have said their budget, was minimal. They had, somehow, to save the money for the hotel. But youth cannot be intimidated. Everything has a solution. So, every morning, before setting off for the beach, they passed by the municipal market of Paphos and bought a watermelon, a halloumi, and a bread, and pulled for the Coral Bay.

This famous beach of Paphos, had only two restaurants then. Very few people. So, after swimming and playing in the sea with the big waves, they used to sit on the sand, cut the watermelon, cut the halloumi, chopped the bread, and ate their lunch with the greatest appetite you can imagine! Getting enough or not getting enough, it did not matter. When the supplies ran out, lunch was over.

I cannot help, but to describe two more spicy incidents of this holiday. One morning, coming out from the hotel to go to the beach – they were girls in their twenties, wearing shorts and having sunburned bodies – the rubbish truck of the Municipality came to collect the rubbish. Back then, there were no tourists in Paphos. The spectacle was extremely exotic for the workers of the Municipality. They got out from the rubbish truck and were looking ecstatic, with their mouths open. But the problem was that the rubbish truck was preventing the girls from getting into their car and leave. So, the workers were gazing, and the girls were waiting awkwardly. In the end, the boldest asked them to move the truck. Waking up from the ecstatic situation they were in, they picked up the rubbish and left, perhaps discussing for a long time the incident they so unexpectedly witnessed.

Another day, with the daring love of adventure that young people have, they decided to go for swimming on the beach of Lara, in Akamas. Lara, at the time, was a completely unknown destination, with no road accessible to cars. There was just a wide path, used basically by tractors, filled with huge potholes. And then, with an old mini and a lot of youthful madness, started to go. The trip was tough and of course they had no idea which beach was that of Lara. When they found a beach and decided to come down, they discovered that in the sea were a lot of sheep and on the beach sat the young shepherd. They waited patiently for the sheep to have their bath and come out of the sea, and then they took off their clothes and dived. But the poor shepherd, who seemed never to have seen such a sight before in his life, was not leaving. He sat down and waited for them to come out of the sea. From their side, they did not want to come out, and they waited for him to leave. After too long, the sheep began to move away, and the shepherd had to fallow! Then, they came out, laughing about their adventure and enjoyed the pristine landscape that was around them.

At night, they had decided not to have dinner. They did not have enough money for two meals a day. So, they agreed every night to go to a restaurant, order a bottle of wine served with peanuts and this would be their dinner. It should be noted, though, that they were usually the only customers of the restaurant. After drinking the wine and eating the peanuts, they used to sing a song by Sophia Vembo, taught to them by Alice, the girl who was the owner of the mini minor:

He’s not a good-looking man
and swims in debt.
Why?
He has only one suit.
And he is wearing it,
Whether it snows, whether it rains.
Why?
But I love him, and he is my light.
Cause, you see, he is my man!

It has been a long time since then. There were holidays much more luxurious and comfortable for our girls. But that year, as well as others like it, remain indelible in memory. It was the ecstasy of the unexpected and the love of youth for life, which like any love is not intimidated by obstacles and overflows with happiness.

The photo is an authentic photo of that period. It represents the spirit of joy and care free, in spite of the tragic circumstances that prevailed. The colours have been altered by time.